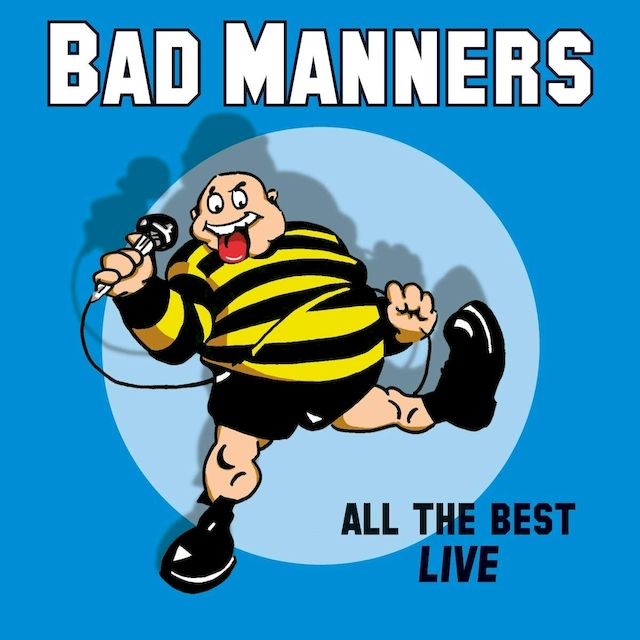 Bad Manners ¦ All The Best Live

Veröffentlichung All The Best Live:

Hörbeispiel(e) All The Best Live:

All The Best Live

British 2-tone ska band
This article is about the ska band. For other uses, see Bad manners.

They were at their most popular during the early 1980s, during a period when other ska revival bands such as Madness, the Specials and the Selecter filled the charts. Bad Manners spent 111 weeks in the UK Singles Chart between 1980 and 1983,[2] and they also achieved chart success with their first four studio albums with Gosh It's ... Bad Manners, Loonee Tunes! and Ska 'n' B being their biggest hits.

Fronted by Buster Bloodvessel (real name Douglas Trendle), the band was formed in 1976 while the members were together at Woodberry Down Comprehensive School near Manor House, North London. They commemorated the 1981 closure of the school on the back sleeve of their Gosh It's... Bad Manners album.[citation needed]

After becoming popular in their native London, Bad Manners signed to Magnet Records in 1980, and became regular guests on television shows such as Tiswas. The band also appeared on The British Music Awards (1981) and Cheggers Plays Pop. In 1985, they also appeared on The Time of Your Life, hosted by Noel Edmonds. Being closely associated with the 2 Tone movement (though never signed to 2 Tone Records itself), they were one of six bands featured in the 1981 documentary film Dance Craze.

Some of their more notable hits include "My Girl Lollipop", "Lip Up Fatty", "Can Can", "Special Brew" and "Walking in the Sunshine". One of the main reasons for their notoriety was their outlandish huge-tongued and shaven-headed frontman, Buster Bloodvessel. His manic exploits got them banned from the British BBC TV chart show Top of the Pops.[3] The band was also banned from Italian TV after Bloodvessel mooned a concert audience, after being told that the Pope was watching on TV.[4]

Bad Manners left Magnet Records in 1983, and Telstar Records released a compilation album, The Height of Bad Manners, which reached number 23 in the UK Albums Chart.[2] The album was assisted with a television advertisement, and it brought the band back to the attention of the media and the British public – but no further chart hits.

The group then went on to sign a contract with Portrait Records in the United States and Mental Notes was released in 1985. For two years the band toured continuously all over the world but decided to disband in 1987.

After Bad Manners disbanded for a brief spell after their deal with Portrait Records ended, Buster Bloodvessel formed a new outfit called Buster's Allstars in 1987, which enabled him and a few of his friends to continue performing in and around London. The capital's venues were often packed to capacity and this prompted the then 20 stone vocalist to reform Bad Manners with his fellow original members Louis Alphonso, Martin Stewart, Winston Bazoomies and Chris Kane. During 1988, the revamped Bad Manners band line-up started to play a number of shows at universities and at scooter rallies and they licensed the name and logo of Blue Beat Records, setting up office inside a 50-foot (15 m) barge called the Blood Vessel in the back garden of Buster Bloodvessel's's former home in London.[citation needed] After Blue Beat closed for business in 1990, Bad Manners were without a recording contract, but continued to tour. In 1992, they signed a deal with Pork Pie Records and Fat Sound was released in Europe. The album was originally intended to be released in the UK on Blue Beat.

In 1996, Buster Bloodvessel moved to Margate and opened a hotel on the seafront called Fatty Towers, which catered for people with huge appetites.[5] While living in Margate, he was a regular spectator at Margate F.C., and Bad Manners sponsored the club for one season. Fatty Towers closed in 1998 and did not re-open despite a facelift. After its closure, Buster Bloodvessel moved back to London.[citation needed]

After five years without releasing any new material, Bad Manners issued their Heavy Petting album in 1997. Six years later, Buster set up another record label and the band released Stupidity on Bad Records in 2003.

Bad Manners appeared on Never Mind The Buzzcocks in the 2004 Christmas Special, performing festive songs to Phill Jupitus' team. (Jupitus is a fan of the band, and Buster Bloodvessel had appeared as a panellist on the show earlier that year.)[citation needed]

Buster Bloodvessel is the only original member to remain in Bad Manners, but the harmonica player, Winston Bazoomies, is an 'honorary member' of the band. Bazoomies has a Facebook fanpage set up in his honour and he currently lives in North London.

Martin Stewart left Bad Manners in 1991, and performed and recorded with The Selecter for fifteen years. He now lives a quiet life in Middlesex with his family, and most recently played the keyboards in a band called The Skatalysts. Louis Alphonso lives in Paris and released his 'A Noir' solo album on the French Fries record label in 2015, while his fellow musician, David Farren, left in 1987 after the band's contract with Portrait Records ended. Farren designed the original band logo, and painted the front cover of the Gosh It's... Bad Manners album. He currently performs in a tribute outfit called The Rollin' Stoned. Chris Kane is a session musician. He left his longtime London home in 2015 and moved to Cambridgeshire. He became a music teacher during the 1990s and also performed with The Jordanaires after leaving Bad Manners. He also enjoys visiting Sweden during his spare time but he can still be seen playing his saxophone with numerous outfits. Brian Tuitt also left the band in 1987 and lives in Kent. The drummer has been performing with Ben Russell & The Charmers in recent times while also working with the Barry White Unlimited Love Tour at various venues in the UK, while Andrew Marson, who also left the group the same year, has worked as a carpenter in and around London and also enjoys performing in a called The Drawbacks. Paul Hyman, another original member who left the band in the late 80s, lives in Enfield and works in the London Stock Exchange, a job he has had since leaving Bad Manners.[citation needed]

Bad Manners headlined their own annual music festival known as Bad Fest in 2005 and 2006 at RAF Twinwood Farm. This festival featured ska, mod-related and punk rock bands from the 1980s to the present.

In 2011, Cherry Red Records released the band's first four albums, Ska 'n' B, Loonee Tunes!, Gosh It's... Bad Manners and Forging Ahead on CD for the first time with added bonus tracks. The albums were issued on their sister label, Pressure Drop.

In December 2012, the band released their first single in thirteen years. "What Simon Says" was released via download just before the festive season, and the music video featured Bad Manners fans from across the world but none of the band members themselves.

In December 2012, founding members of the band met for the first time in decades at the Ship public house in Soho, London. Paul Hyman, Martin Stewart, Brian Tuitt and Chris Kane met with band historian and harmonica player David Turner, and Christopher 'Dell' Wardell, a music writer and promoter from Darlington. On 18 July 2013, seven of the original nine members reunited at The Brownswood public house, near Finsbury Park, that is within striking distance of their old school, Woodbery Down Comprehensive. The 'Bad Manners Originals' who attended the reunion were Andy Marson (alto sax), Paul Hyman (trumpet), Alan Sayag (harmonicas), Chris Kane (tenor sax), David Farren (bass), Martin Stewart (keyboards) and Brian Tuitt (drums). The meetings were arranged after Wardell's 'Where Are They Now?' article was published in The Northern Echo in 2012, providing details on the current whereabouts of all of the original band members.[citation needed]

During 2016, Bad Manners toured the United Kingdom to celebrate their 40th Anniversary. 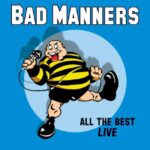