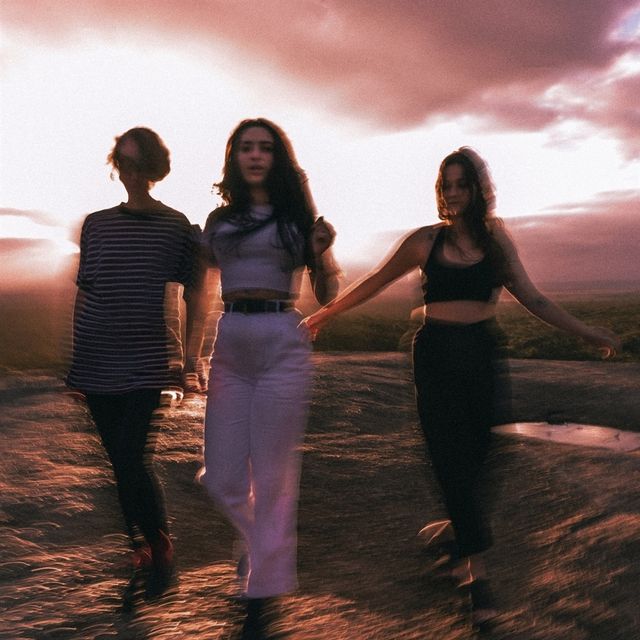 Camp Cope ¦ Running With The Hurricane

Veröffentlichung Running With The Hurricane:

Hörbeispiel(e) Running With The Hurricane:

Running With The Hurricane

Their eponymous debut album, released in April 2016, reached the top 40 in the ARIA Albums Chart, and was nominated for a J Award for Australian Album of the Year.[3] They were also nominated in six categories at the inaugural National Live Music Awards and won the ‚Heatseeker Award‘.[4] Website Faster Louder choose Camp Cope’s self-titled debut album as their Album of the Year for 2016.[5] The group also won Best Emerging Act at the 2016 The Age Music Victoria Awards.[6] In 2019, Happy Mag listed them at no.3 on their list of „the 15 Australian female artists changing the game right now“.[7]

Camp Cope has been described as „part Courtney Barnett, part Juliana Hatfield“,[8] and „melodic, uplifting and aching“.[9] The band describes themselves as „power emo“.[10]

As a regular of the Australian singer/songwriter circuit and with a handful of solo releases under her belt, McDonald decided to bring together Kelly-Dawn Hellmrich on bass and Sarah Thompson on drums to flesh out her solo project. Hellmrich had previously played in Sydney band Palmar Grasp, while Thompson had previously played in Brisbane band Razel. The band was named Camp Cope as a reference to Sydney beach Camp Cove, as Sydney native Hellmrich was feeling homesick.[11] The band played support slots with the likes of The Hotelier, Andrew Jackson Jihad, and Waxahatchee, as well as playing their own headline shows.[12]

The trio entered the studio, and by the end of the year had recorded their debut album with producer Sam Johnson. Released on Poison City in April 2016, their eight-track self-titled debut earned them critical acclaim and entered the ARIA albums chart at number 36.[12] „Lost: Season One“, a single from the album referencing the television show Lost, was performed by Camp Cope for Like a Version in September 2016, along with a cover of „Maps“ by the Yeah Yeah Yeahs.[13]

After a joint tour of Australia at the end of 2016 with Philadelphia’s Cayetana, Poison City issued a limited split single that featured new material by both bands.[12]

In 2017 Camp Cope supported Against Me! and Modern Baseball on their Australian tours, toured the United States with Worriers, performed at the St Jerome’s Laneway Festival and sold out two shows in the Drama Theatre at the Sydney Opera House. At the end of the year, they returned to the studio to record their second album.[12]

The band’s second studio album, How to Socialise & Make Friends, was released on 2 March 2018 by Poison City Records and Run for Cover Records.[12] In June and July 2018, they took part in their second United States tour, co-headlining with Run For Cover label-mates Petal.[14] In late August and early September 2018 they undertook a partial UK and European tour with English band Caves.[15]

In early February 2019, Camp Cope announced their first North American headlining tour starting in April,[16] supported by Thin Lips, Oceanator and An Horse.[17] On this tour, Maq started playing a new unreleased song.[18] In September 2019, they embarked on a UK tour with post-punk band Witching Waves.[19]

2021–present: Running with the Hurricane

All members of Camp Cope have been involved in other bands.

Hellmrich performs solo under the moniker of Kelso. Previous collaborators on the project have included Gab Strum of Japanese Wallpaper and Xavier Rubetzki Noonan of Self Talk.[23] Self-described as ‚cute weird songs for cute weird people‘, Kelso has released several singles as well as an EP, Always a Godmother, Never a God.[24]

McDonald, under the moniker of Georgia Maq, released two solo acoustic EPs: Friends and Bowlers Run in 2013, and With a Q in 2014. A song from With a Q, „Footscray Station,“ was recorded by Camp Cope as the B-side to the single „Keep Growing“. McDonald also released a split seven-inch with Spencer Scott in 2015. On 5 December 2019, McDonald released her debut solo album Pleaser, a pop record which she described as „Paul Westerberg meets Robyn“.[25] In 2021, McDonald said on the Creative Detour podcast that she is working on new solo material with no release date set. „I feel good about what I’m producing,“ she said. „I feel like I can produce things myself. In a really fun and cool way. Now I can kind of tell the difference a bit more between like Camp Cope songs and Georgia Maq songs.“[26]

Away from her solo career, McDonald was the vocalist for punk band Würst Nürse, and appeared on their debut EP Hot Hot Hot.[27] She left the band in November 2018 after several vocal surgeries.[28] McDonald was also briefly a member of Melbourne indie rock band Employment.

In 2016, Camp Cope led a campaign dedicated to preventing and reporting incidents at concerts and festivals called It Takes One. Through this, they put out t-shirts saying ‚The Person Wearing This T-shirt Stands Against Sexual Assault And Demands A Change.‘ Many other artists such as Courtney Barnett, Chris Farren, DZ Deathrays, Ecca Vandal, Dune Rats and Alex Lahey have worn the shirt in support.[31]

While playing the Falls Festival in 2017, Camp Cope changed the lyrics of their song „The Opener“ to reflect the lack of female artists playing the festival.[32]

Camp Cope is known for McDonald’s powerful voice, Hellmrich’s distinctive basslines, and Thompson’s ’steady, stoic drumming‘.[33][34] They have been described as ‚rough, minimal rock [with] a punk edge‘,[35] and the lyrics ‚articulate human entanglements with a lack of sentimentality that belies how much [McDonald] cares‘.[36] Songs are initially written by McDonald, who then sends a ‚crappy phone recording‘ to Hellmrich and Thompson, before they all come together and create the finished song.[37]

Camp Cope has been influenced by many bands, such as Philadelphia indie rock bands Hop Along, and Cayetana, whose records they gave their engineer before recording How to Socialise & Make Friends. Bassist Hellmrich is also influenced by Joy Division bassist Peter Hook and blink-182 bassist Mark Hoppus.[citation needed]

The Australian Music Prize (the AMP) is an annual award of $30,000 given to an Australian band or solo artist in recognition of the merit of an album released during the year of award. The commenced in 2005.

The Australian Women in Music Awards is an annual event that celebrates outstanding women in the Australian Music Industry who have made significant and lasting contributions in their chosen field. They commenced in 2018.

The J Awards are an annual series of Australian music awards that were established by the Australian Broadcasting Corporation’s youth-focused radio station Triple J. They commenced in 2005.

The Music Victoria Awards, are an annual awards night celebrating Victorian music. They commenced in 2005.[62][63]

The National Live Music Awards (NLMAs) are a broad recognition of Australia’s diverse live industry, celebrating the success of the Australian live scene. The awards commenced in 2016.