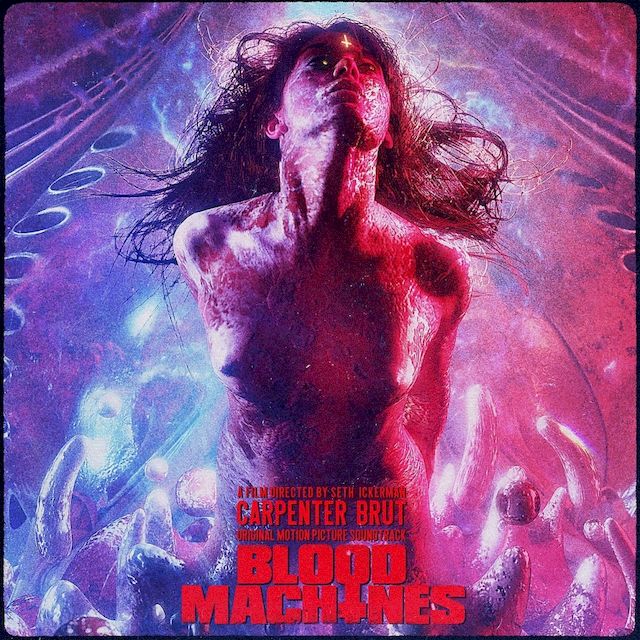 Franck Hueso,[1][2] better known by his stage name Carpenter Brut, is a French synthwave artist from Poitiers, France.[citation needed] Hueso claims his relative anonymity is a deliberate artistic choice in order to place more importance on the music itself, rather than the identity of the musician behind it.[3] Hueso started writing music as Carpenter Brut with the intention of mixing sounds from horror films, metal, rock, and electronic music.[3]

Carpenter Brut has released three EPs, EP I (2012), EP II (2013) and EP III (2015) which were collected and released together as the album Trilogy (2015). He has released two additional studio albums, Leather Teeth (2018) and Blood Machines OST (2020), along with one live album, CARPENTERBRUTLIVE (2017). He has also contributed original music to a variety of soundtracks, both for film and video games.

In live performances Carpenter Brut is joined on stage by guitarist Adrien Grousset and drummer Florent Marcadet, both from the French metal band Hacride[1][4] and in 2016 Brut toured the United States with the Swedish heavy metal band Ghost.[5] In a 2018 interview with Loudwire, Tobias Forge, lead singer of the band Ghost, stated that Hueso was also the producer for the band Deathspell Omega, a French black metal band known for the anonymity of its members.[2]

Hueso describes the beginnings of Carpenter Brut as "a joke," and contends that the name Carpenter Brut is a play on words, derived from the surname of filmmaker and composer John Carpenter and the champagne .[6] The idea to make electronic music stemmed from wanting to write music alone, rather than being in a band. Hueso explained in 2017 "Electro music is perfect for that [writing alone], especially when you’re not a good musician like me. I don’t know how to play guitar; it would have been a poor decision."[7]

Carpenter Brut's 2012 and 2013 EP's were released on BlackBvs Records. The third EP, in 2015 (and all subsequent releases, as of April 2020), were released on Hueso's own No Quarter Prod label. The label was created with the intention of allowing Hueso to remain independent and maintain control over his own image and art.[8] Additionally, two songs from TRILOGY (Le perv and Roller Mobster) were used in the soundtrack for Hotline Miami 2: Wrong Number. The track "Escape from Midwich Valley" was used in one of the game's trailers.

Carpenter Brut's second full-length album was released at midnight on February 22, 2018 with no pre-release promotion.[9] A press release accompanying the release read: "Leather Teeth is the soundtrack to a movie envisioned by Carpenter Brut, one that tells the story of a shy American teenager, Bret Halford, who can’t get the girl and will do anything he can to win her over, including becoming the singer of one of the most talked about bands in mid-‘80s glam-metal, Leather Patrol." The press release included a quote from Carpenter Brut, describing the album as "pure frenzy like Master of Puppets, or any of the good old metal albums."[9] Leather Teeth features Kristoffer Rygg of Ulver and Mat McNerney of Grave Pleasures on vocals.[10]

In a December, 2018 interview, Hueso explained that Leather Teeth was inspired by "Judas Priest, and the glam rock of the '80s."[11] It is the first album in a trilogy and tells the story of "[a] main character [who] is still a young student in love, and not yet the serial killer he will become in the second part of the trilogy. Even if he has tantrums as in “Monday Hunt” or “Hairspray Hurricane,” he is still convinced that he can conquer Kendra, the cheerleader."[11] Hueso described himself, in a 2018 interview, as being "tired of this race to whoever makes the darkest or most brutal music, it’s just bullshit," while describing Leather Teeth's sound as being "softer" and "more glamorous" than Trilogy "while flirting with a dark side that will be developed in the next album," a sequel which he intends to be "darker and more violent."[10][11]

Carpenter Brut's Blood Machines OST was released in April, 2020. It is the soundtrack to a 50-minute film directed by Seth Ickerman, director of the "Turbo Killer" music video. The idea came from online response to "Turbo Killer" and requests for a sequel; the film was devised by Ickerman while Hueso describes himself as being "in charge of the soundtrack."[7][8]

Hueso has suggested that a new Carpenter Brut album may be released by the end of 2020 "at the very earliest."[12] The album will involve a "reinvention" of Carpenter Brut and taking the music "on a darker path." It will be a continuation of the Leather Teeth trilogy and will involve a story of "a character who wants to take revenge on the cheerleader who’s been making fun of him 'serial killer style'."[12] Hueso described one track off the album as "really long, really violent, and which will have much more of a black metal vibe to it. The ending will go on for about five minutes and will consist of only blast beats." Hueso suggested Ben Koller of Converge would perform on the track.[12]

Hueso also wrote music for the 2016 video game Furi, a process which he described as being "a lot less free" than composing music for Carpenter Brut. Hueso explained that he was required to work with scenes that the video game designers sent, while also working with loops that can go on for several minutes if the player decided to stay in the same place.[7] Ultimately, Hueso described it as "a good experience," but wasn't sure he would attempt it again, citing a greater affinity for soundtracks for film than video games.[7]

In 2019 Hueso appeared in the documentary film The Rise of the Synths which explored the origins and growth of the genre. Hueso appeared alongside various other composers from the Synthwave scene, including John Carpenter himself who also starred in and narrated the film.[citation needed]

When working on a trailer for Festival de l’Etrange, director duo Raphaël Hernandez and Savitri Joly-Gonfard (working under the name ) approached Hueso with the request to use the track "Hang'em All" for the trailer's soundtrack. Having been aware of the duo and liking their "DIY and smart" approach to their work, Hueso allowed use of the track and Ickerman went on to direct all of Carpenter Brut's music videos for the first three EP's.[8]

For the music video to "Turbo Killer," Hueso gave "carte blanche" to the directors, with the only stipulation that they "give birth to certain characters" he had in mind. Hueso saw the video two weeks before its wide release and described his reaction to it as "thrilled [...] like a kid opening his Christmas presents," and wondering "how the fuck did they do that?"[8]

The music videos for the album Leather Teeth were directed by , who also created the visuals projected during Carpenter Brut's live performances.[13][12]

Blood Machines is a film project with Seth Ickerman as director and scored by Carpenter Brut. A trailer for the film was released to Kickstarter backers on 20 May 2020 and on Shudder the following day.[14] The official synopsis reads:

Two space hunters are tracking down a machine trying to free itself. After taking it down, they witness a mystical phenomenon: the ghost of a young woman pulls itself out of the machine, as if the spaceship had a soul. Trying to understand the nature of this entity, they start chasing the woman through space...[15]

Ickerman had wanted to make a feature length film using a Carpenter Brut soundtrack prior to the release of the Turbo Killer music video,[7] and due to the success of Turbo Killer and fan requests for a follow-up, Blood Machines entered development.[7] A successful Kickstarter campaign saw the film jump from an estimated run time of 30 minutes to 50 minutes;[15] it is expected to be released in 2020 and will be a sequel to the Turbo Killer music video.[16] As with their earlier collaborations, Ickerman have "free rein" in terms of the visuals, with Hueso describing himself as being "in charge of the soundtrack."[8] In December, 2016, David Sandberg, director of Kung Fury (2015), signed on to Blood Machines as producer; a press release for the announcement described the film's plot as "following two space hunters chasing the female ghost of a machine through the galaxy."[16]

"At the very beginning," Hueso commented, Carpenter Brut was influenced by Justice, but by 2017 he would be "much more inspired by prog rock artists," like Toto and Supertramp along with Iron Maiden, Meshuggah, Ulver, Nine Inch Nails, Type O Negative, Pink Floyd and The Beatles.[17] In a 2019 interview with Kerrang!, Hueso stated that his early musical influences included Iron Maiden, Metallica, Megadeth, Cannibal Corpse and Napalm Death.[18] Hueso claimed in 2016 to not listen to horror movie soundtracks, but noted there were "themes that stand out," such as Creepshow, Maniac Cop and Friday the 13th and that he does enjoy the compositions of John Williams, John Carpenter, Alan Silvestri and James Horner.[19]

Cinematically, Hueso's influences include 1980s "Slasher/Horror/B-movies as well as blockbusters," and Hueso has specifically noted, "everything from Steven Spielberg" along with Star Wars, The Terminator, RoboCop, Predator, The Thing, Street Trash, Bad Taste, The Texas Chain Saw Massacre, The Evil Dead, Nekromantik and Maniac Cop, commenting, "not only did I find that these films were totally badass, but their soundtracks were too. Music was an integral part of the movies, that’s what I enjoyed." Ultimately he concluded that, "those influences run through everything Carpenter Brut does: the desire to give you something violent, cinematic and fun!"[18][8]

Hueso bases his live performances on those of Trent Reznor of Nine Inch Nails, stating "I didn’t like playing live at the beginning [...] I just wanted to make music in my room. When it became clear that people wanted me to play I worked hard to put on a real show. It’s the same as Trent Reznor with Nine Inch Nails: if I’m going to play live, it needs to be huge."[18] 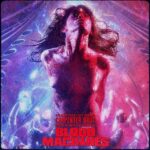