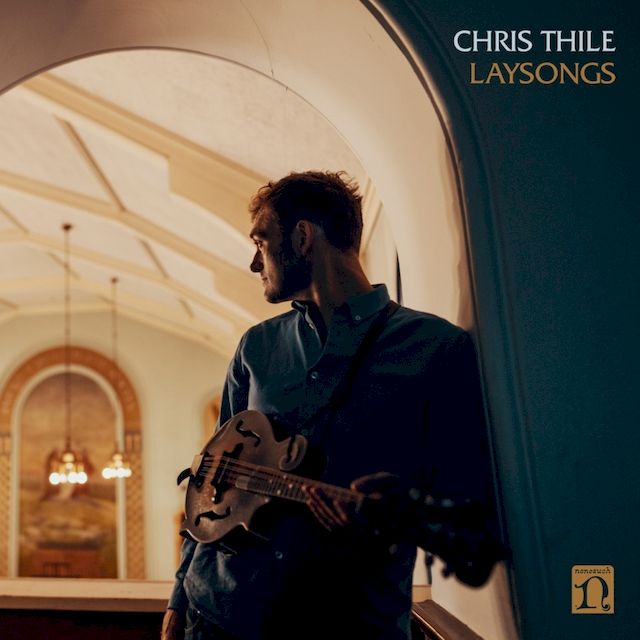 Christopher Scott Thile (/ˈθiːli/;[3] born February 20, 1981) is an American mandolinist, singer, songwriter, composer, and radio personality, best known for his work in the progressive acoustic trio Nickel Creek and the acoustic folk and progressive bluegrass quintet Punch Brothers. He is a 2012 MacArthur Fellow.[4] In October 2016, he became the host of the radio variety show A Prairie Home Companion, which in December 2017 was renamed Live from Here.[5][6][7]

The three members of Nickel Creek met in 1989 at Carlsbad, California's That Pizza Place, listening to weekly bluegrass shows with their parents. Their first album, Little Cowpoke, was released on December 31, 1993. Later albums included Nickel Creek and This Side, which went platinum and won a Grammy for Best Contemporary Folk Album, respectively.[8] In 2005, Nickel Creek released Why Should the Fire Die?, which received critical acclaim and sold 250,000 units.[9]

Thile has also released solo albums, including Not All Who Wander Are Lost (2001) and 2004's Deceiver, on which he wrote, composed, sang, and played every part. In 2008, Thile released a collaboration album with bassist Edgar Meyer, and he also plans to release a collaborative album with Hilary Hahn.[10][11]

Thile was born in Oceanside, California, in 1981. His earliest memories of music are listening to Stan Getz's recording of "The Girl from Ipanema" before he even turned one year old. When he was two, his family started going to That Pizza Place, where he listened to John Moore's band Bluegrass Etc. When Thile was four, his family moved to Idyllwild, California.

Thile began playing the mandolin at the age of five, taking occasional lessons from John Moore. At age eight, Thile's family and the Watkins family formed Nickel Creek. The band performed at many California bluegrass festivals, and as a result Chris had to be home-schooled. At age twelve, he won the mandolin championship at the Walnut Valley Festival in Winfield, Kansas.

That same year, 1993, Thile made a demo tape and sent it to the Sugar Hill and Rounder record labels. Both labels showed interest, but the Thiles went with Sugar Hill.[16] The next year, Chris Thile released his first solo album, Leading Off, featuring mostly original compositions.

Main articles: Not All Who Wander Are Lost (album) and Deceiver (Chris Thile album)

Following the major success of the album Nickel Creek, Thile released Not All Who Wander Are Lost in 2001. The album featured guest appearances from several well-known instrumentalists such as Stuart Duncan, Béla Fleck, Edgar Meyer, Jerry Douglas, and Bryan Sutton.

In 2003, Thile teamed up with mandolinist Mike Marshall for the duet album Into the Cauldron, which included original pieces as well as pieces by Charlie Parker and J. S. Bach. Also in 2003, Thile joined Mark O'Connor for his double CD set "Thirty-Year Retrospective" which was nominated for a Grammy. In 2004, Thile released Deceiver, an experimental album on which he recorded every track himself. This included electric guitar, piano, drums, violin, viola, cello, and bass. Deceiver demonstrated some pop/rock songwriting in addition to "newgrass".

Main articles: How to Grow a Woman from the Ground and Punch (album) 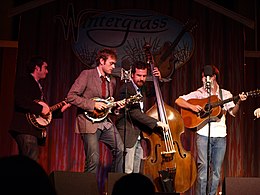 In August 2006, Nickel Creek announced that at the end of the year, they would no longer be recording together as a group, and their tour scheduled through 2007 would be their last for an indefinite period of time. In February 2014, the group announced that it would be releasing another album.

Thile was a judge for the fifth annual Independent Music Awards to support independent artists' careers.[19]

In 2006, Thile formed How to Grow a Band, with whom he recorded How to Grow a Woman from the Ground, Thile's fifth album. In an interview with the Nashville City Paper, Thile described the band's formation:

We got together one night just to drop a ton of money, drink too much wine, eat steaks, and commiserate about our failed relationships. We had gotten to play together a few days before and we had said that we needed to do something musical together. With our hearts smashed to pieces, it became more urgent – our lives had gone the same way for so long. I knew I wanted to have a band with Gabe [Witcher], but I didn't know if it would be a rock ensemble, an ambitious acoustic classical thing or a bluegrass group. We played, and there was a serious, instantaneous connection. Then I knew I wanted to put together a bluegrass band – one with a lot of range, but aesthetically a bluegrass band.[20]

The band consisted of Chris Thile (mandolin), Gabe Witcher (fiddle/violin), Chris Eldridge (guitar), Greg Garrison (bass), and Noam Pikelny (banjo). Bryan Sutton has also filled in on guitar when necessary while Eldridge played out commitments to The Infamous Stringdusters. In 2007, the band officially changed its name first to "The Tensions Mountain Boys" and then "Punch Brothers".

On March 17, 2007, at Carnegie Hall, this group debuted Thile's ambitious "The Blind Leaving the Blind", a 40-minute suite in four movements that Thile told NPR was written in part to deal with his 2004 divorce.[21] 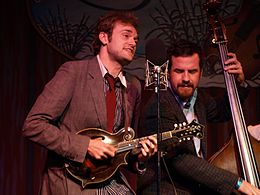 To promote "Punch", Thile and Punch Brothers planned a year-long tour in 2008, as well as a February 29 appearance on The Tonight Show with Jay Leno.[22] In late 2008, Paul Kowert replaced Garrison on bass. Punch Brothers released Antifogmatic on February 15, 2010, and continued to tour. On November 5, 2010, the band performed "Rye Whiskey" on the Late Show with David Letterman with Steve Martin guesting on banjo.

In November 2014, Punch Brothers released a single entitled "I Blew It Off", from their then-untitled fourth album. In December 2014, the band announced the scheduled release of an upcoming album and simultaneous release of another new single, "Julep".

In August 2008, Thile and bassist Edgar Meyer announced the release date of the duo's planned debut album. The album was released on Thile's label Nonesuch Records on September 23, 2008.[23] Commenting on the collaboration, Thile said "Edgar is one of the biggest influences on my musical life, and now I'm in a duo with him and writing songs with him. This was my dream. I always wondered what it would be like to be playing music this hard."[24] The duo toured in September and October 2008 to promote the album.

In 2014, Thile recorded a new collaborative album with Edgar Meyer entitled Bass & Mandolin and embarked on a tour with Meyer to support the album.[26]

Also in 2014, Thile reunited with Nickel Creek to release a new album called A Dotted Line in celebration of their 25th anniversary. The group also embarked on a national tour titled NC25.[27]

Thile is featured in the documentary Bluegrass Journey, along with the rest of Nickel Creek. He has also appeared on a number of other artists' recordings, including Béla Fleck's Perpetual Motion, playing arrangements of Baroque, Impressionist, Classical and other styles of music with Fleck and Edgar Meyer; Jam Session, with Mark O'Connor, Frank Vignola, Bryan Sutton, and Jon Burr; the Dixie Chicks' Home, Kate Rusby's Awkward Annie, Julie Fowlis's Cuilidh, Dolly Parton's Little Sparrow, Dierks Bentley's Up on the Ridge, and Sarah Jarosz's Song Up in Her Head and Follow Me Down.

Thile has performed as a duo with guitarist and vocalist Michael Daves since 2005.[28] They released their debut album, Sleep With One Eye Open, on May 10, 2011. Recorded at Jack White's studio, the album consists of 16 classic bluegrass duets. Jack White also produced and played on the duo's 7" vinyl record Man in the Middle on Third Man Records. Thile and Daves met in 2005 at a bluegrass jam at NYC's Baggot Inn.

In 2011, he recorded The Goat Rodeo Sessions with cellist Yo-Yo Ma, bassist Edgar Meyer and fiddle player Stuart Duncan.[33] On October 25, 2011, he appeared on the Tonight Show as a member of the Yo-Yo Ma and Friends musical act.[34] On June 19, 2020, the same group of musicians released a second album entitled Not Our First Goat Rodeo.

For 2018-19, Thile was named to the Richard and Barbara Debs Composer's Chair at Carnegie Hall.[36]

In 2021 the artist was inter alia part of the Newport Folk Festival in July.[37] 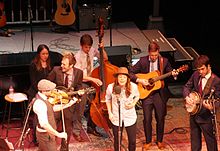 Thile made his first appearance on Garrison Keillor's radio show A Prairie Home Companion in 1996, at age 15 and has returned numerous times—as a solo artist, with Nickel Creek, and with Punch Brothers. On February 7 and 14 in 2015 and January 30 and February 6, 2016, he was the show's guest host. [38] On July 21, 2015, Keillor officially announced that he was leaving the show and that Thile would succeed him as permanent host in 2016.[39] Thile's first show as host took place on October 15, 2016, at the Fitzgerald Theater in St. Paul.[6] On February 18, 2017, Thile announced that his version of the show had been renewed for another season. On December 16, 2017, at the Town Hall theater in New York, Thile announced that the show would be renamed Live from Here. The show continued airing live on public radio until its final show, on May 30, 2020.[40] American Public Media, the producer of the show, halted production as a result of the COVID-19 pandemic's effect on shows with live audiences;[41] on June 14, 2020, Minnesota Public Radio announced the show's cancellation.[42]