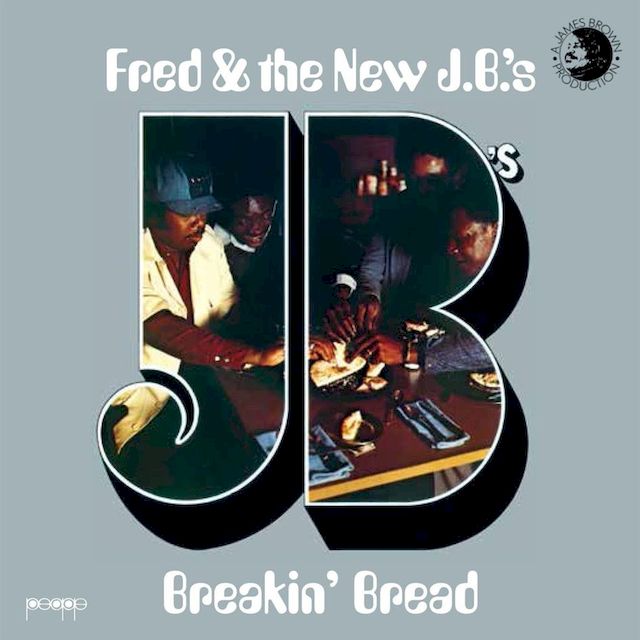 The J.B.'s (sometimes punctuated The JB's or The J.B.s) was the name of James Brown's band from 1970 through the early 1980s. On records the band was sometimes billed under alternate names such as Fred Wesley and the JBs, The James Brown Soul Train, Maceo and the Macks, A.A.B.B., Fred Wesley and the New JBs, The First Family, and The Last Word.[1] In addition to backing Brown, the J.B.'s played behind Bobby Byrd, Lyn Collins, and other singers associated with the James Brown Revue, and performed and recorded as a self-contained group. In 2015, they were nominated for induction into the Rock and Roll Hall of Fame[2] but failed to be inducted and can be considered for Musical Excellence in the future. They have been eligible since 1995.

The J.B.'s were formed in March 1970 after most of the members of Brown's previous band walked out on him over a pay dispute. (Brown's previous bands of the 1950s and 1960s had been known as The James Brown Band and The James Brown Orchestra.) The J.B.'s initial lineup included bassist William "Bootsy" Collins and his guitarist brother Phelps "Catfish" Collins, formerly of the obscure funk band The Pacemakers; Bobby Byrd (founder of the original Famous Flames singing group) (organ), and John "Jabo" Starks (drums), both holdovers from Brown's 60s band; three inexperienced horn players, Clayton "Chicken" Gunnells, Darryl "Hasaan" Jamison, and Robert McCollough; and conga player Johnny Griggs. This version of the J.B.'s played on some of Brown's most intense funk recordings, including "Get Up (I Feel Like Being a) Sex Machine", "Super Bad", "Soul Power", and "Talkin' Loud and Sayin' Nothing". They also accompanied Brown on a European tour (during which they recorded the long-delayed live album Love Power Peace), performed on the Sex Machine double LP, and released two instrumental singles, the much-sampled "The Grunt" and "These Are the J.B.'s".

In December 1970 trombonist Fred Wesley rejoined James Brown's organization to lead the J.B.'s. Other former Brown sidemen including Maceo Parker and St. Clair Pinckney eventually followed his lead, while the Collins brothers and most of the rest of the "original" J.B.'s left Brown to join George Clinton's Parliament-Funkadelic collective. Wesley and Parker left in 1975. Brown continued to bill his backing band as the J.B.'s into the mid-1980s, when he changed their name to the Soul Generals, or Soul G's.

In addition to backing Brown on stage and on record during this era, the J.B.'s also recorded albums and singles on their own, sometimes with Brown performing on organ or synthesizer. Their albums were generally a mixture of heavy funk tracks and some more jazz-oriented pieces. Nearly all of the J.B.'s recordings were produced by Brown, and most were released on his own label, People Records. The band scored a number of chart hits in the early 1970s, including "Pass the Peas", "Gimme Some More", and the #1 R&B hit, "Doing It to Death". Credited to "Fred Wesley & the J.B.'s", "Doing It to Death" sold over one million copies and was awarded a gold disc by the RIAA in July 1973.[3]

Some of the J.B.'s releases have unusual characteristics. The 1974 album Breakin' Bread is unique, in that most of the songs have a Fred Wesley spoken reminiscence dubbed onto the beginning of the song, each time over a canned backing track. It is in sharp contrast to James Brown's real-time dominance of the proceedings on the classic Doing It to Death LP. A similar oddity is encountered on the other 1974 album, Damn Right I Am Somebody, where 20-second extensions of that album's track-2 jam (each including James Brown's trademark shriek) have been spliced onto the beginnings of most of the other songs. Under the name A.A.B.B., the group released a single, "Pick up the Pieces One by One", which reached #108 on the U.S. chart in 1975.[4] Both the song and the name—which stood for "Above Average Black Band"—were a tribute to and tongue-in-cheek reply to the then-popular Scottish funk group, the Average White Band (Also known as AWB) and its #1 hit single, "Pick Up the Pieces".[4] The J.B.'s final single for Brown's People label, 1976's "Everybody Wanna Get Funky One More Time", features a rare hornless arrangement.

As funk music gave way in popularity to disco in the 1970s, the group's material and arrangements changed accordingly, but their chart success declined along with Brown's own.

Like most of James Brown's music, the recorded output of the J.B.'s has been heavily mined for samples by hip hop DJs and record producers.

During the 1980s and 1990s, Maceo Parker and Fred Wesley intermittently toured under the name The JB Horns, sometimes with other former Brown sidemen such as Alfred "Pee Wee" Ellis in tow. The JB Horns recorded several albums for the Gramavision label which were later reissued by Rhino Records. They also recorded an album under this name with producer Richard Mazda called I Like It Like That.

A version of the J.B.'s including Fred Wesley, Bootsy Collins, Pee Wee Ellis, Bobby Byrd, and Clyde Stubblefield assembled to record the 1999 "reunion" album Bring the Funk on Down, dedicated to the memory of St. Clair Pinckney. The album was released in Japan by P-Vine Records, and in 2002 it was reissued in the U.S. by Instinct Records.

A reunion of the original J.B.'s rhythm section, with Bootsy and Phelps Collins, Clyde Stubblefield, and Jabo Starks, and supplemented by Bernie Worrell, recorded the Superbad movie soundtrack. They went on to perform the first tribute concert remembering James Brown.

as The JB Horns