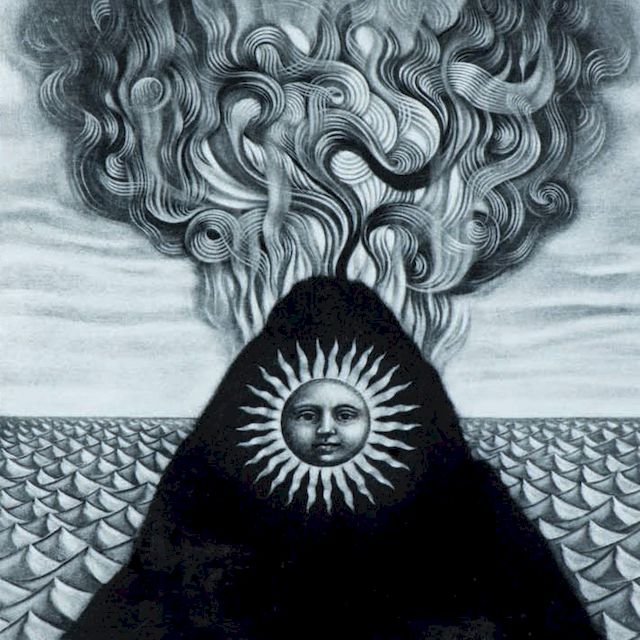 Magma is the sixth studio album from the French metal band Gojira. The album was released on 17 June 2016 through Roadrunner Records.[3] The album was recorded at the band's studio in New York City, and was produced by Joe Duplantier, mixed by Johann Meyer and mastered by Ted Jensen. The album has been noted as a stylistic departure from the band's previous albums, featuring a more accessible atmospheric sound and more prominent use of clean vocals.[4] The album sold 17,000 copies in its first week of release in the United States, charting at number 24 on the Billboard 200, making Magma the band's highest sales and chart debut until Fortitude.[5] Magma had sold 400,000 copies worldwide in its first seven months.[6] The album was nominated for Best Rock Album and the single "Silvera" was nominated for Best Metal Performance at the 59th Annual Grammy Awards.[7]

In November 2014, Gojira relocated to New York City and construction began on their own music studio in Queens.[8] By April 2015, the studio was complete and the band began recording music.[8] However, recording of the album was put on hold when Joe Duplantier and Mario Duplantier's mother fell ill.[8] At this stage, the Duplantier brothers decided to associate the album title with the imagery of the magma in the Earth's core, stating that they "were feeling a mix between memories of the past and a fear of the future, with all the emotions burning inside. Magma is this expression of something boiling inside: we cannot touch it, but eventually it will erupt. It makes perfect sense for how we were feeling at the time".[9] Their mother subsequently died.[8] The band spent some time touring before returning to studio to continue recording.[8]

On Magma, Gojira placed less emphasis on the notion of extreme metal than the previous albums. Mario Duplantier said, "It's a need that corresponds to our ages, to our life experiences, to the periods we have lived through", referring to the birth of their children and the death of their mother.[10] Of the overall tone of the album he commented that it would be "more mature, less visceral", adding that they also "tried to refine the music ... it was a real challenge to develop simplified things on drums";[11] while Labadie noted that they "desired more breathing" in the compositions.[12] Joe Duplantier stated about the album's general direction: "We want a short album. Something less epic than what we usually do. People's attentions are shorter now. So a lot of the songs are four minutes."[13] He also stated: "We have some Pantera-ish kind of riffs, which is kind of new for us. But [...] we want riffs to be a little punchier sometimes."[14] He also explained that the writing process for Magma differed from previous albums, saying that "We do things a little differently. We dump songs, we dump riffs, which we never did before. [In the past] we would prepare 12 songs, get in the studio and record them just exactly as they are on the demos. We decided to do it differently this time."[15]

Mario Duplantier stated about the lyrical aspect of the album: "When you read Joe's lyrics, for me, I cry right away. They're very deep and to the point. No bullshit. We recycle our sadness and depression in the music."[13] The album marked more emphasis on clean vocals representing a natural progression. Joe Duplantier said,

The real question for me is why did I start to scream in the first place? ... I've really wanted to sing for the longest time. I feel more at peace in my life now, I have love in my life and I have a family, but I still have this rage about the world, about politics, the environmental problems we face and the way people pollute the Earth, the fact that I suffered so much at school from the cruelty of other kids. All these things I carry inside me and I guess they made me scream into the microphone.[16]

The song "Magma" described "a journey to the sun" and evoked Joe Duplantier's intuitions about reincarnation.[10] Joe Duplantier sang in his native language in the song "Low Lands": "par–delà le ciel, par–delà le soleil" (English: "beyond the sky, beyond the sun").[17]

Two months would be required to record the vocals.[12] The mixing of the album was completed in February 2016.[18]

On 2 April 2016, the band released an official video for the track "Stranded", directed by Vincent Caldoni.[19]

On 20 May 2016, Gojira released a music video for the song "Silvera", described by Rolling Stone as "frenetic" and "shocking". The music video directed by Drew Cox shows the band performing "on NYC rooftop amidst a flurry of bodies falling up".[20]

On 8 July 2016, the band released a music video for the penultimate track of the album, "Low Lands".[21][22] Described by the band as "an intimate and poetic piece",[22] the music video was directed by photographer Alain Duplantier, cousin of the band's Joe and Mario Duplantier, and assisted by their sister, Gabrielle, also a photographer.[23][21][22] The music video features the Duplantier brothers' childhood home in Ondres in the Landes forest, France, "near a stormy ocean",[23][21] as well as "gothic visuals and some symbolically personal imagery" for the brothers,[22] which mingled representations of "the absence and the omnipresence of the mother". In the video, Claire Théodoly, cousin of Joe, Mario and Gabrielle Duplantier, played the role of the mother "walking towards her deliverance". The music video was edited by director of photography/editor Mathieu Laclau. The song was "an open letter from Joe to his mother". At first, he was afraid that the video would be too personal, he nevertheless mentioned that the song would speak to those who have been "affected by the loss of a loved one".[23] Mario Duplantier said:

Our mother wanted us to make a very big fire after she left, a celebration she called 'Patricia's Liberation'. Two days after her death, we gathered about a hundred people and lit a fire six or seven meters high [20-23 feet flame lengths]. Our uncle Alain was present and very moved. We recreated this giant fire for the filming.[23]

Gojira performing in Toronto in October 2016. For Gojira, imagery plays an "important role" through concerts that are also real shows, visually speaking.[24]

The Magma World Tour consisted of six weeks of touring then a one-month break before getting back on the road for five to six weeks, repeating the cycle for a total duration of about three and a half years.[24]

On 2 May 2016, Gojira announced a North American tour in support of Magma. The band was supported by the British metal band Tesseract and toured the United States and Canada from July to October 2016.[25] In early June, the band debuted two new songs called "Silvera" and "Stranded" at the Rock in Vienna Festival in Austria.[26] On 14 July, Gojira performed a secret intimate concert for three hundred people at Saint Vitus in New York,[27][28] which had sold out in ten minutes.[29] Loudwire wrote that "New York City will always be home to Gojira and fans will show up anywhere they play, no matter the size of the venue." They also reported that Joe Duplantier spoke about the terrorist attack in Nice, France, "which for most of us was the first time in the evening that we heard about the calamity." They also noted that it "was bittersweet because it was also the birthday of bassist Jean-Michel Labadie."[30] In July 2016, the band announced that they would support Alter Bridge and Volbeat on a European tour in November and December 2016.[31]

In Dom Lawson's review for The Guardian, he gave the album 5/5, writing that "Magma is the kind of album that metalheads would love non-believers to check out, if only because it confounds all the usual stereotypes about the genre being unimaginative and dumb."[35] Adrien Begrand's review for Spin likewise received the album positively, writing that on Magma, Gojira "strip their distinctive sound down even further, most often building songs around one insidiously catchy riff and resisting self-indulgent flights of fancy. It's common for young acts in modern metal to show astonishing technical skill but no sense of restraint. By contrast, there's little else out there like the taut, minimalist Magma right now."

Rolling Stone's Daniel Epstein noted that Magma marks a stylistic departure for Gojira compared to previous albums. "Largely absent are the epic song arrangements and neck-snapping displays of instrumental wizardry that marked their recordings up through 2012's L'Enfant Sauvage. Instead, new tracks like 'The Shooting Star', 'Stranded' and 'Pray' are more about finding a fearsome groove or riff and squeezing it for every last drop of darkness and catharsis."[40] He noted the death of Joe and Mario Duplantier's mother as a likely influence on this development. Epstein also compared the album to Metallica's 1991 self-titled album and Mastodon's 2011 The Hunter, writing that "for those who can appreciate a tightly focused hard rock album infused with emotions that are often just as heavy as its riffs, Magma offers a listening experience that is as rewarding as it is therapeutic."

Writing for Pitchfork, Zoe Camp described Magma as "their most accessible release yet, melodically immediate and charged with emotion." Camp sided with Epstein and other critics in considering the album a stylistic departure from previous releases. Camp wrote that on Magma, Gojira "deliver a taut, catchy crossover effort that inoculates their heady metal with equal parts melodic immediacy and emotional intimacy, while retaining the pillars of their caustic panoply: mathy riffs, uncommon time signatures, ferocious, death-metal-styled vocals, and above all, overpowering anxiety. The new sound's largely a consequence of the Duplantiers' grief; their mother died during the album's gestation, forcing the brothers to get out of their own heads and revisit the material they had so far – often fighting back tears during the sessions."

Metallica's Kirk Hammett called Magma "an incredible piece of art"[50] and "the best album he had listened to in a long time".[51]

“This album is also a ‘requiem’ for our planet. […] We don’t want to be negative or cynical about the fate of humanity, but the situation on Earth is growing critical, and the way humans behave is so catastrophic that we really need to express our exasperation about it. It’s not fear, but anger. But we still believe that consciousness can make a difference and that we can change things as human beings.”