The Forever Story was a highly anticipated project, as it marks JID's first solo output in almost four years, since the critically acclaimed DiCaprio 2 was released in 2018.[1] Our Generation Music wrote: "With a forthcoming album that's been in the works for nearly a half decade, fans could ironically call the wait for JID's next project 'The Forever Story.'"[2]

Conceptually, The Forever Story is a sequel to JID's debut album, The Never Story, released in 2017.[2] The title is a direct reference to the 2017 album's title, and the artwork alludes to the 2017 album's artwork.[3] The artwork depicts the rapper "standing in the middle of a crowd containing people from all walks of life",[4] capturing "the different realities Black people face in America."[5]

In March 2020, JID began working on the album at the Spillage Village studio house in Atlanta with members of the group expected make appearances. However due to the COVID-19 pandemic, they decided to record collectively for the album Spilligion.[6] In an interview with, he told Billboard, "This next album [The Forever Story] is the best shit I've ever done in my life. Every step I've taken was worth it, and our blocks are building."[7]

JID began teasing his third studio album in 2019 through use of social media, but promotion did not begin until January 2022, when the lead single, "Surround Sound", was released. During his performance at Coachella in April 2022, he told the crowd he would announce the album release date during another performance the next week; however, he never ended up doing it.[9] On August 9, 2022, he unveiled the album artwork and revealed that it would be released on August 26. A second single from the album, "Dance Now", was also released the same day.[3] On August 19, JID released "2007"—a song which was originally meant to serve as the album's outro, but could not be included in the end due to problems with sample clearance—exclusively through YouTube.[10] On August 22, he revealed the album tracklist, consisting of fifteen tracks.[11] Two days before the release, JID hosted a promotional scavenger hunt event in three different US cities; he instructed fans that those who are able to locate a Pontiac G6 (a car JID used to own) will get to hear the album early.[12] The album was officially released on August 26, 2022.[13]

On November 2, 2022, JID announced that intended album outro "2007" would be released the following day,[14] and on November 3, 2022, an extended version including the song was released to streaming services.

Prior to the release, JID commented on the album's themes and creation process: "Initially I wanted to create an album that serves as an origin story and speaks to who I am and what I came from. [...] This has been the heaviest project for me to make and I take pride in my vulnerability that came in the midst of creation."[15] In an interview with Complex, JID spoke on why he wanted to include personal family stories in the album saying:

[My family] is basically a part of how I became who I am. It gives inklings of why my [mindset] is a certain type of way. I gave more detail and in-depth stories [on this album], but there's still more layers to be peeled back, which I am going to do because this is going to be a long process of trying to understand me. This is just a good piece of the origin story, and this is me finding that space to be more visible and present with words.[16]

The original outro for the album, "2007", is a narrative-driven song that tells the story of JID's upbringing and college experience from an aspiring football player to a rapper. JID highlighted release dates of several albums as checkpoints to depict critical moments in his life, such as J. Cole's The Come Up, The Warm Up, and Cole World: The Sideline Story, Kendrick Lamar's Section.80, and his debut The Never Story. The song also includes skits from his father talking about when he found out JID was kicked out of college and decided to pursue rapping, and J. Cole telling the story about how they met and when he decided to sign him to Dreamville.[16][17]

The Forever Story was met with critical acclaim upon its release. At Metacritic, which assigns a normalised rating out of 100 to reviews from mainstream publications, the album received an average score of 83, based on 6 reviews.[18]

Ben Broyd of Clash praised the album, saying “JID’s latest release is a wonderful insight into the rapper’s formative years, and ultimately through the introspective manner allows for an enthralling listen. Through ‘The Forever Story’ JID has claimed his seat at the prestigious table of Atlantan greats”.[20] Writing for Pitchfork, Dylan Green called it “a sprawling and sometimes frustrating bridge between JID’s upbringing and his place within hip-hop canon and Black history at large”.[22] In an anonymously written assessment for AllMusic, the reviewer claimed that it was "an album every bit as ambitious and monumental as the two solo studio outings that preceded it" and felt it demonstrated that JID was, "growing in terms of technical talent while also opening up more lyrically."[19]

In a more mixed review for HipHopDX, David Aaron Brake claimed that "the skills are there, it’s littered with flashy displays of technique and it sounds better than fine most of the time. But there’s nothing on the line: at the end of the day, it doesn’t matter who wins the game."[21]

The Forever Story ¦ The Never Story

Destin Choice Route (born October 31, 1990), better known by his stage name JID (also stylized J.I.D), is an American rapper. He is a part of the musical collective Spillage Village, founded by EarthGang in 2010, with Hollywood JB, JordxnBryant, and 6lack, among others.[2] He is signed to J. Cole's Dreamville Records and Interscope Records. He is also a member of the hip hop supergroup Zoink Gang, with Smino, Buddy, and Guapdad 4000.[3]

JID began gaining recognition after releasing several independent projects such as Route of Evil (2012), Para Tu (2013) and DiCaprio (2015). His debut studio album, The Never Story, was released in 2017 to public praise and included the single "Never".[4][5] He released his second album, DiCaprio 2, in 2018; it contains the singles "151 Rum" and "Off Deez" (with J. Cole) and also received critical acclaim.[6][7] In 2021, he released the single "Enemy" with pop rock band Imagine Dragons, which became his highest charting and most popular single, peaking at number 5 on the Billboard Hot 100. His most recent album, The Forever Story (2022), received widespread acclaim from critics and became his highest charting album peaking at number 12 on the Billboard 200.

Destin Choice Route was born October 31, 1990, in Atlanta, Georgia. His parents were Carl Louis Route Jr. and Kathy Jean Route.[8][9] The youngest of seven children, he adopted the moniker JID from his grandmother's nickname for him based on his "jittery" behavior.[10] Route grew up listening to Sly and the Family Stone and Earth, Wind & Fire before shifting to the 1990s New York hip-hop scene and rappers such as Jay-Z, Nas and Mobb Deep. He attended Stephenson High School, where he played football as a defensive back.[11][8] He received a scholarship to play NCAA Division I football at Hampton University, where he redshirted his first year, then played two seasons before he was kicked off the team.[12][13] Route eventually moved in with Doctur Dot and Johnny Venus from EarthGang who he met from his time in Virginia.[14]

JID released his first mixtape Cakewalk on May 18, 2010. Earlier that year, he formed Spillage Village with EarthGang, Hollywood JB, and JordxnBryant.[2] He released his second mixtape, Cakewalk 2 on June 29, 2011. He released his third mixtape, Route of All Evil on June 25, 2012, with guest features from relatively unheard artists EarthGang and Stillz. JID funded his music career with jobs at call centers and delivering pizza before he started to get booked for local live shows.[15][16] On October 22, 2013, his next mixtape was released titled Para Tu. The mixtape was later re-released on December 29, 2017.[17][18][19] 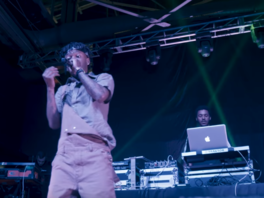 On February 20, 2017, it was announced that he had signed to J. Cole's Dreamville label, first releasing the single "Never". The full-length album, The Never Story was released on March 10, 2017. The album includes guest features from EarthGang, 6LACK, and Mereba, and production from J. Cole, Hollywood JB, Christo and Childish Major, among others.[23][24] He later released three more music videos from the album: "D/vision", "Hereditary", and "EdEddnEddy".

He was also an opening act on the 4 Your Eyez Only Tour in 2017 in the North American and European legs.[25] On October 10, JID appeared alongside rappers Cozz, Kodie Shane and Ali Tomineek in a cypher at the BET Hip Hop Awards.[26] In November 2017, JID co-headlined in his Never Had Shit Tour with EarthGang, and guests Lute, Chaz French, and Mereba. It included 15 dates in North America, and continued in 2018, with 19 dates in Europe.[27] On December 13, JID appeared on a remix with Foster The People and Saba called "Pay The Man".[28]

In June 2018, he was featured on the cover of XXL's 2018 Freshman Class.[29] In July, he was featured on Denzel Curry's "Sirens" from Ta13oo, and was announced he would go on tour with Mac Miller and Thundercat. However, the tour has since been cancelled due to the passing of Mac Miller.[30] The first single for his second album was released on September 18, titled "151 Rum".[31] On October 3, 2018, JID premiered the song "Working Out" on A COLORS SHOW.[32] On his birthday, his second album DiCaprio 2 was announced for a release date of November 26, 2018, and revealed the tracklist soon after.[33] The album's second official single, "Off Deez" featuring J. Cole, was released on November 6.[34] Other collaborators on the album include A$AP Ferg, 6LACK, Ella Mai, BJ the Chicago Kid, Method Man and Joey Bada$$, with production mainly coming from his in-house team of Christo, Hollywood JB, J. Cole and Elite, among others.[35]

DiCaprio 2 was released on November 26, 2018, to positive reviews and critical acclaim.[36][37] JID announced the first leg of his headlining Catch Me If You Can tour, which included 34 dates, beginning in January 2019.[38] The supporting acts were revealed to be Reason, Hardo, and Lou The Human. On February 9, JID's show in Ithaca, New York was shut down by the police due to a visible crack forming in the ceiling underneath the venue where the concert was held.[39] On February 12, 2019, JID announced the second leg of his Catch Me If You Can tour. The tour includes 26 dates starting in May, and features supporting acts Saba, Deante' Hitchcock, and Mereba.[40]

In 2019, JID was part of the Dreamville compilation album Revenge of the Dreamers III. The singles "Down Bad" and "Costa Rica" were certified gold by the RIAA.[41] In 2020, as part of Spillage Village, he was featured on the singles "End of Daze" and "Baptize", for their fourth collective album Spilligion.[42][43]

JID was featured on Doja Cat's song "Options", included on her Grammy-nominated third album, Planet Her.[44] He later collaborated with Imagine Dragons on the mega-hit[45] "Enemy"; it peaked at number five on the Billboard Hot 100,[46] becoming his highest charting song.[47]

JID teased his third album, The Forever Story, throughout 2021.[45] The first and lead single from the album, "Surround Sound" featuring 21 Savage and Baby Tate, was released on January 14, 2022.[48] On March 31, he appeared on the Dreamville compilation D-Day: A Gangsta Grillz Mixtape, on the songs "Stick" and "Barry From Simpson".[49] On August 9, JID released the second single from The Forever Story, titled "Dance Now", featuring Kenny Mason.[50]