Japanese Breakfast is an indie rock band headed by Korean-American musician, director, and author Michelle Zauner. The band released its first studio album Psychopomp (2016) on Yellow K Records, followed by Soft Sounds from Another Planet (2017) and Jubilee (2021), both on Dead Oceans.

The first Japanese Breakfast release was June (2013), the result of a project where Zauner and Rachel Gagliardi recorded and posted one song every day for the month of June.[1] These songs were posted daily on the Tumblr blog rachelandmichelledojune. As Japanese Breakfast, Zauner also participated in a song project with musicians Gabrielle Smith, Florist, Frankie Cosmos, and Small Wonder. All of their songs were posted daily on the Tumblr blog may5to12songs. Zauner released her songs from the project on Bandcamp as a digital album entitled Where Is My Great Big Feeling? on June 6, 2014, followed shortly by American Sound on July 24. Both were released as the cassette tape American Sound/Where Is My Great Big Feeling.[2][3] Re-recorded versions of several songs from these releases appeared on the first two Japanese Breakfast albums.

While in Oregon with her family, Zauner continued recording as Japanese Breakfast. She described the project as having much more to say after Tropical Jinx, the 2014 studio album by Little Big League. Originally Zauner began to record samples of music as a meditative exercise and "instant gratification".[4]

2016–2021: Psychopomp and Soft Sounds from Another Planet

Zauner performing live with her band in 2017

On May 4, 2017, Zauner released the single "Machinist" and announced her second studio album, Soft Sounds from Another Planet, which released on July 14, 2017.[8] The music video for "Machinist" was directed by Zauner, in collaboration with Adam Kolodny. It stars Zauner as a woman who falls in love with a robot and tears apart her spaceship trying to build a body for it.[9] The song "Boyish" was released as a single on June 7, 2017.[10] A third single from the album, "Road Head", was released on July 6, 2017.[11] On October 19, 2017, a music video for "Body is a Blade" was released. It was animated using old family photographs and video of Zauner visiting locations from the photos. She described it as "a really personal mixed media piece, almost like a moving scrapbook".[12] On February 13, 2018, the music video for "Boyish" was released. It depicts a girl going to a high school dance, where Zauner and her band, accompanied by fellow indie musician Leslie Bear, are playing a set.[13] The video was directed by Zauner, who described it as her "favorite video yet".[14] A game entitled Japanese BreakQuest was released alongside Soft Sounds from Another Planet.[15] The game features all songs from the album as 8-bit MIDI tracks which were created by Peter Bradley, and the game was developed by Zauner and game designer Elaine Fath.[15]

In 2018, it was revealed during E3 2018 that Japanese Breakfast would be providing the soundtrack for indie game Sable.[16] The game was initially set to be released in 2019, but was delayed twice.[17] The game and its soundtrack were released on September 23, 2021.[18]

In 2019, Japanese Breakfast released two singles under the W Hotels music label, "Essentially" and a cover of the Tears for Fears song, "Head Over Heels". 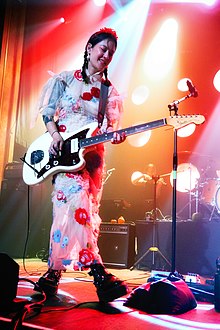 On March 2, 2021, Zauner released the song "Be Sweet", the first single from the third Japanese Breakfast album, Jubilee, which was released by Dead Oceans on June 4, 2021. The self-directed music video for "Be Sweet" features Marisa "Missy" Dabice and Zauner acting as FBI Agents tracking aliens.[19] On March 15, Japanese Breakfast performed the songs "Be Sweet" and "Jimmy Fallon Big!" on The Tonight Show Starring Jimmy Fallon.[20][21] A second single, "Posing In Bondage", was released on April 8, 2021. The video, also directed by Zauner, features Harmony Tividad as a grocery store employee.[22]

The third and final single from Jubilee, "Savage Good Boy", was released on May 19, 2021.[23] The video, directed by Zauner, features actor Michael Imperioli as a billionaire in a bunker, with Zauner as a young woman he has convinced to live underground with him.[24] It is a prequel to the video for "Posing in Bondage".

On June 10, a cover by Japanese Breakfast of their song "Be Sweet" in the fictional Simlish language was released for the eleventh expansion pack for The Sims 4.[25]

In 2018, Zauner directed the music video for the Japanese Breakfast song "Boyish", which she described as her "magnum opus".[27]

Michelle Geslani of Consequence of Sound has described Japanese Breakfast's sound as experimental pop.[28] Anna Gaca of Spin has described it as lo-fi.[7] 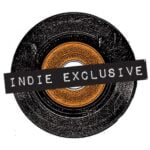