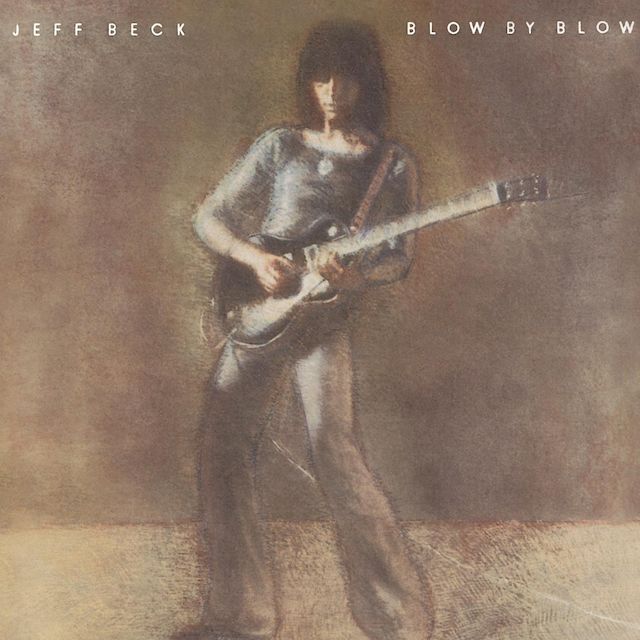 Blow by Blow is the first solo album by British guitarist Jeff Beck, released on Epic Records in 1975, and recorded in October 1974. A purely instrumental album, it peaked at No. 4 on the Billboard 200 and was certified platinum by the RIAA.

After the dissolution of the power trio Beck, Bogert & Appice (BBA) in spring 1974, Beck took time for session work with other groups. In December, a half-hearted "audition" for The Rolling Stones took place, Beck jamming blues with the band for one day, before realising their musical styles were not compatible.[1]

During this period, Beck decided to record an all-instrumental album, bringing back keyboardist Max Middleton from the second Jeff Beck Group. He hired George Martin to produce after hearing his work with the Mahavishnu Orchestra's 1974 album Apocalypse.[1] According to Carmine Appice, who played with Beck in BBA, he was involved in the writing and recording process of Blow by Blow but his parts were edited out after a dispute with Beck's management.[7][8] The fourth key contributor to Blow by Blow after Beck, Middleton, and Martin was Stevie Wonder, who gave Beck his songs "Cause We've Ended as Lovers" and "Thelonius", with Wonder playing clavinet on the latter uncredited.[9] The former song appeared on Wonder's 1974 album Stevie Wonder Presents: Syreeta, made with then-wife Syreeta Wright, while Wonder never recorded "Thelonius" himself. A cover of the Beatles song "She's a Woman" was selected, as well as the composition "Diamond Dust" by Bernie Holland of the group Hummingbird consisting of musicians from the second Beck Group. The other five tracks were band originals with Beck and Middleton the main writers, and the last track on each side featured string arrangements by Martin. Beck dedicated "Cause We've Ended as Lovers" to fellow guitarist Roy Buchanan, with an acknowledgement to Wonder.[10]

Blow by Blow was released on 29 March 1975. It was a hit in the US, reaching number four on the Billboard album charts, eventually selling a million copies. It remains Beck's highest-charting album.[1][9]

On 27 March 2001, a remastered edition for compact disc was reissued by Legacy Records, Epic and its parent label Columbia Records now a division of Sony Music Entertainment.