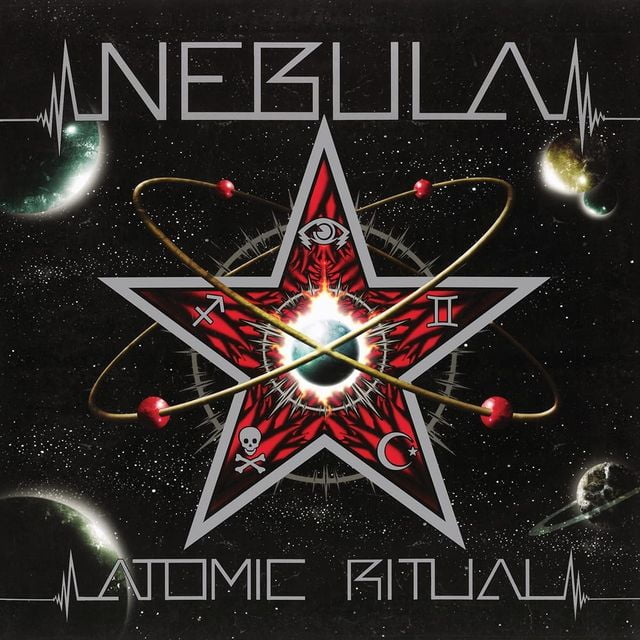 Atomic Ritual is an album from rock band Nebula, released in 2003.[5][1] Some copies of the CD come with a Liquor and Poker sticker. On one of the flaps of the album case there are 5 lines of text reading:

Underneath this the initials A.C. are printed. These are the initials of occultist Aleister Crowley, the author. This is not Nebula’s only Aleister Crowley reference; their MySpace tagline is a direct quote from Crowley: „Do what thou wilt, shall be the whole of the law.“

„So It Goes“ is featured on the soundtrack to Tony Hawk’s Underground 2. It also contains references to Kurt Vonnegut’s book Slaughterhouse-Five.

All songs written by Eddie Glass and Ruben Romano except where noted.

Nebula is an American rock band formed by guitarist Eddie Glass and drummer Ruben Romano upon departing Fu Manchu in 1997. Mark Abshire soon joined as the band’s original bassist. Nebula went on a hiatus in early 2010 and reformed in 2017.

Abshire remained with the band until the recording of Atomic Ritual (2003), which was produced by Chris Goss of Kyuss fame. Dennis Wilson and Simon Moon (Eddie Glass) stepped in as bassists until a more permanent replacement was found in Tom Davies. Atomic Ritual was released to warm critical praise, with AllMusic calling Nebula a „hard-working power trio [that] sounds like it has been hanging out in the garage since 1973, blissfully unaware of the changing world outside. Which is definitely to its benefit“.[5] Rob Oswald replaced founding member Ruben Romano on drums in 2007.

In August 2009, Adam Kriney, formerly of La Otracina, was recruited to replace departing drummer Oswald, though he too announced his departure in January 2010 and was replaced by Jimmy Sweet. In early 2010, Nebula announced that it was going on an indefinite hiatus. Glass later explained that „things started getting a bit rough with the touring and I got sick of it“, though Nebula were merely „taking a break for a while“ and not breaking up.[6]

The band reunited in 2017 and released their sixth studio album, Holy Shit, on June 7, 2019, on the Heavy Psych Sounds Records label.[7]