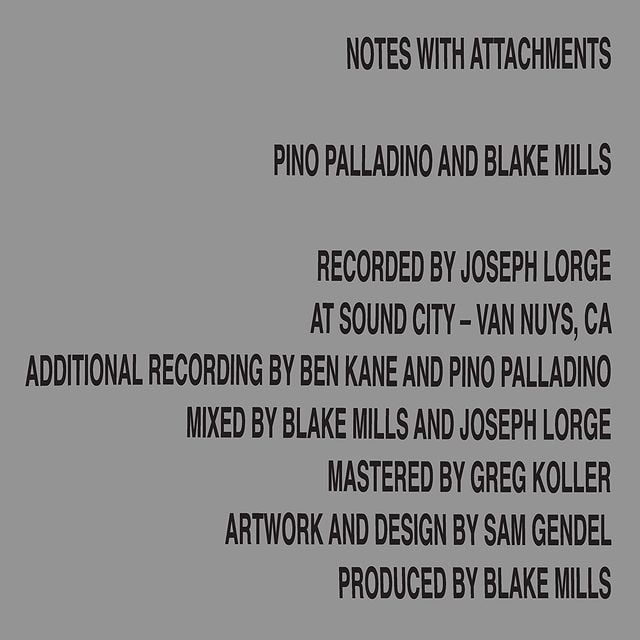 Giuseppe Henry "Pino" Palladino (born 17 October 1957) is a Welsh musician, songwriter, and record producer. A prolific session bassist, he has played bass for acts such as The Who,[1] the John Mayer Trio, Nine Inch Nails, Gary Numan, Jeff Beck and D'Angelo.[2]

The son of a Welsh mother and Italian father (from Campobasso),[3] Giuseppe Henry Palladino[4] was born in Cardiff on 17 October 1957. He attended a Catholic school. He began playing guitar at age 14 and bass guitar at 17. He bought his first fretless bass one year later, playing mostly R&B, funk and reggae with a rock and roll backbeat.[5]

Palladino was drawn to Motown and jazz at an early age, and took classical guitar lessons. He liked Led Zeppelin and Yes and started a rock band.[6]

In 1988/89, Pino played on the Don Henley album The End of the Innocence playing on three tracks including the single "New York Minute".

In 1991, he joined The Law with Paul Rodgers, formerly of Bad Company, and drummer Kenney Jones, who succeeded Keith Moon in The Who after Moon died, and recorded the album The Law.

In the 1990s, Palladino alternated between fretless bass and fretted and 4-string and 6-string bass. He played with Melissa Etheridge, Richard Wright, Elton John, and Eric Clapton. 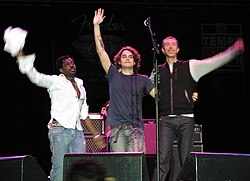 He played on Mike Lindup's first solo album, Changes, with Dominic Miller on guitar and Manu Katché on drums.[8]

In 1999, he began working with Richard Ashcroft of The Verve on Ashcroft's debut solo album, Alone With Everybody.[9]

After The Who's bassist John Entwistle died the night before the start of their first tour in two years, Palladino became the band's bass guitarist on tour. In 2006, he joined the remaining band members on their first album in twenty-four years, Endless Wire. He played with The Who at the Super Bowl XLIV half-time show in 2010 with Simon Townshend on guitar, Zak Starkey on drums, and John "Rabbit" Bundrick on keyboards. In 2012, he toured with The Who on their Quadrophenia revival. He stopped touring with The Who in 2016, but is still occasionally involved in studio sessions, appearing on their 2019 album titled Who.

Palladino met Steve Jordan in the mid-1980s while both were working as session musicians, which blossomed into a friendship. Jordan credits Palladino's apparent ability to "feel" changes in music, through melodies, basslines, and an embrace of genres of nearly every kind. According to Jordan, he had planned to meet up with John Mayer and Willie Weeks in January 2005 to perform Tsunami Aid: A Concert of Hope for victims of the tsunami that struck southeast Asia. Weeks was unable to make the performance, and Jordan suggested Palladino, who had heard some of Mayer's work and was willing to come. Beginning a set that included the Jimi Hendrix song "Bold as Love", the three found a chemistry together. They recorded an album and toured as a trio.[10] 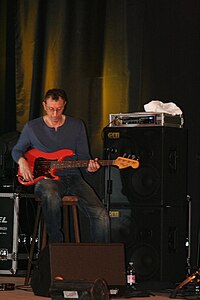 At the Amarone in Jazz festival, San Pietro in Cariano, Italy, September 2008

They released the album Try!, on 22 November 2005. The eleven-track live album includes cover versions of "Wait Until Tomorrow" by Jimi Hendrix and "I Got a Woman" by Ray Charles, two songs from Mayer's album Heavier Things, and new songs by Mayer. In addition, Mayer, Palladino, and Jordan are credited as songwriters on three songs: "Good Love Is on the Way", "Vultures", and "Try!".[11] Palladino appeared on Mayer's third album Continuum, fourth album Battle Studies and seventh album The Search for Everything.

In March and April 2006, Palladino toured with Jeff Beck and played with J. J. Cale, and Eric Clapton on their 2006 album The Road to Escondido. In 2009, he formed a trio with keyboardist Philippe Saisse and Simon Phillips.

He played with Simon and Garfunkel on their Old Friends reunion tour.[10]

In January 2011, he entered the studio with D'Angelo to finish recording Black Messiah.[12]

In 2013, he played on the Nine Inch Nails album Hesitation Marks and was a member of the touring band. Additionally, he co-produced José James' album No Beginning No End (2013).[13]

Palladino is noted for his use of the fretless bass on many albums. While it was typical for a bass in a commercial track to have a rather generic sound and stay "playing the low notes", Palladino preferred a different sound, combining fretless tone with an octaver effect, and basslines that frequently added chords, lead lines, and counter-melodies in the higher range of the instrument. Typical of this style was his playing on Paul Young's "Wherever I Lay My Hat". His equipment at that time included a fretless 1979 Music Man StingRay Bass and Boss octave pedal (OC-2).

From the 1990s onward, Palladino has leaned mainly towards a Fender Precision Bass. He used his 1963 Sunburst Fender Precision on Voodoo, using heavy gauge LaBella strings (tuned down to DGCF), a foam mute, and an Ampeg B-15 amplifier. He has also played Fender Jaguar Bass, Lakland Jazz Bass, and Larry Graham Signature JJ-4B Bass.

The Fender Pino Palladino Signature Precision Bass is modeled after two of Pino's Fender Precision Basses. The body features faded fiesta red paint over desert sand paint, based on Palladino's 1961 Precision Bass, while the neck shape and round-lam rosewood fretboard are based on his 1963 sunburst Precision Bass.[14]

In 1992, Pino married Marilyn "Maz" Roberts, a member of Paul Young's vocal group, the Fabulous Wealthy Tarts. They have three children: Fabiana, Giancarla, and Rocco, who are all involved in the music industry.[15]

Blake Mills (born September 21, 1986) is an American songwriter, guitarist, producer, and composer based in California.[2]

Blake Mills was born in Santa Monica, California, United States,[1] and grew up in Malibu, where he attended Malibu High School with Taylor Goldsmith. Mills and Goldsmith began their musical careers in a band they co-founded called Simon Dawes. Simon Dawes released its debut EP What No One Hears in 2005, and its first LP Carnivore in September 2006 via Record Collection.[3][4] After the band broke up in 2007, Goldsmith and his younger brother, Griffin, formed the band Dawes with Simon Dawes bassist Wylie Gelber, and Mills went on to serve as a touring guitarist for Jenny Lewis.[5] He went on to tour with Band of Horses,[6] Cass McCombs,[7] Julian Casablancas[8][9] and Lucinda Williams.[10][11] As a session musician, Mills has collaborated with Conor Oberst, Kid Rock,[12] Weezer, The Avett Brothers, Paulo Nutini,[13] Norah Jones, Carlene Carter, Jesca Hoop, Dixie Chicks, Zucchero, Pink, Lana Del Rey, Dangermouse, Vulfpeck and more.

In 2010, Mills released his first solo LP, Break Mirrors, via Record Collection. The original intent for the album was to serve as a calling card for Mills to get session work.[14] Break Mirrors was touted as the album of the year by many websites and fellow musicians, despite its limited release.[15][16] In late 2011, after spending back-to-back years on tour and in the studio playing on other people’s records, Mills made the decision to begin producing in order to explore musical concepts beyond guitar.[17] Analog Edition Records released a Blake Mills double A side 7" in 2011, featuring the songs "Hey Lover" and "Wintersong" in 2011.[18]

In January 2012, Mills appeared on Conan O’Brien for his first national televised performance as a solo artist. He covered Bob Dylan’s “Heart Of Mine,” which he had recently recorded for an Amnesty International benefit CD.[19] Later that year, he went on to co-produce Jesca Hoop's album The House that Jack Built,[20][21] produced Sara Watkins' album Sun Midnight Sun,[22] wrote and produced "Sad Dream" on Sky Ferreira's latest EP Ghost and an additional two tracks on her upcoming LP I'm Not Alright. Mills was featured on electric slide guitar on the track '"Go Home" from the 2013 debut album from the group Lucius.[23] For the compilation album Just Tell Me That You Want Me: A Tribute to Fleetwood Mac, he co-produced and played with Billy Gibbons and Matt Sweeney on the track "Oh Well".[24] Mills also served as the opening act and guitarist for Fiona Apple during her 2012 tour through North America.[25][26] Mills co-produced the track "Artifact 1" on Conor Oberst's album, Upside Down Mountain, which was released in May 2014. He also produced the forthcoming untitled release from Jesca Hoop and Mt. Egypt's III.[27]

In 2015 Mills was nominated for a Grammy in the category of Producer of the Year, Non-Classical for his work on Alabama Shakes breakthrough album Sound & Color.[29]

Mills' 2016 producer credits include albums from former bandmates Dawes, along with upcoming albums from John Legend, Laura Marling, Jim James and Perfume Genius. In the same year, he also performed guitar and various other instruments on Andrew Bird's album Are You Serious. In 2017, Mills took part in Randy Newman's Dark Matter as a guitarist.

In November of 2018, Mills quietly released an almost-entirely-instrumental EP entitled "Look" on his own label imprint New Deal Music. [30] The album was created almost entirely using Roland guitar synthesizers from the 1970s with collaboration from saxophonist Sam Gendel, singer Natalie Mering of Weyes Blood, and violin and string-arrangement virtuoso, Rob Moose, who has appeared on nearly every release Mills has produced. "Look" was the second release on New Deal Music. The first New Deal release, in September of 2018, was a soundtrack by Colin Stetson, Canadian-American saxophonist, multireedist, and composer based in Montreal, for the short-lived dramatic television series The First (TV series).

On December 5th, 2019 Mills teased a clip of a new song via an NPR piece by Grayson Haver Currin titled "Songs In An Emergency" [31] that centers around the urgency of climate change. The new song, from his upcoming and yet-to-be-titled third full-length album, is titled "Summer All Over." It is a piano-based ballad musing on the Malibu fires of 2018 and co-written with Cass McCombs. When describing the spacious sound-landscape that the song embodies and the title, Mills commented that "writing about the season of summer inherently evokes a Beach Boys vibe, maybe because I'm in Los Angeles, but the implication of the warmest season happening all over the world at the same time is an 'endless summer." The third full-length is expected to be released in 2020 on New Deal Music with management support by Record Collection and distribution by Verve Label Group, a division of UMG Recordings, Inc.