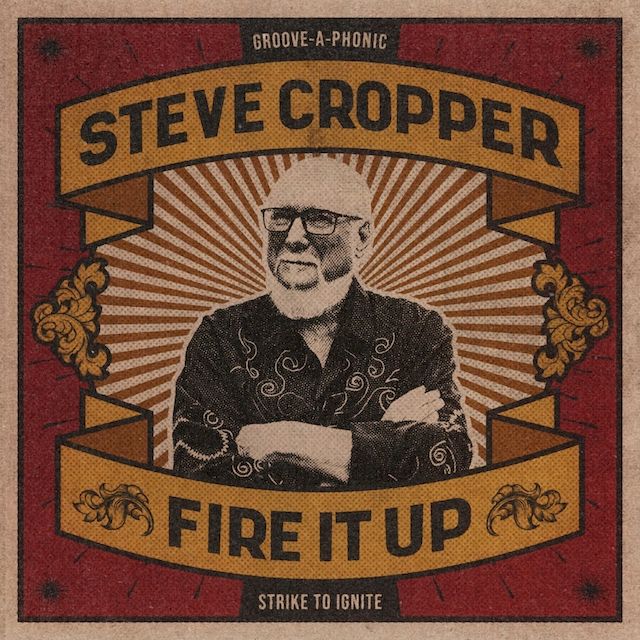 Steve Cropper ¦ Fire It Up

Veröffentlichung Fire It Up:

Steven Lee Cropper (born October 21, 1941),[1] sometimes known as "The Colonel", is an American guitarist, songwriter and record producer. He is the guitarist of the Stax Records house band, Booker T. & the M.G.'s, which backed artists such as Otis Redding, Sam & Dave, Carla Thomas, Rufus Thomas and Johnnie Taylor. He also acted as the producer of many of these records. He was later a member of the Blues Brothers band.[2] Rolling Stone magazine ranked him 39th on its list of the 100 greatest guitarists of all time,[3] while he has won two Grammy Awards from his seven nominations.[4][5]

Born on a farm near Willow Springs, Missouri, Cropper lived in the nearby towns of Dora and West Plains before moving with his family to Memphis at the age of nine.[6] It was in Memphis where he was exposed to black church music, which, he said, "blew me away".[6] Cropper acquired his first guitar via mail order at the age of 14.[6]

He loved the Five Royals and he admired guitarists including Tal Farlow, Chuck Berry, Jimmy Reed, Chet Atkins, Lowman Pauling of the Five Royales and Billy Butler of the Bill Doggett band.[1]

Cropper and guitarist Charlie Freeman formed the Royal Spades, who eventually became the Mar-Keys.[7] The name referred to the marquee outside Stax studios, known as Satellite Records at the time. Eventually, the Mar-Keys began playing on sessions and had a hit single of their own with "Last Night" in 1961. 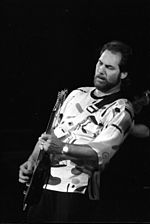 Besides being impressed with the young guitarist's playing, Stax Records president Jim Stewart saw professionalism and maturity beyond Cropper's years. When American Records founder Chips Moman left Stax, Cropper became the company's A&R man. He became a founding member of the Stax house band Booker T. & the M.G.'s, along with Hammond organ player Booker T. Jones, bassist Lewie Steinberg (who was replaced by Donald "Duck" Dunn soon thereafter) and drummer Al Jackson Jr..[8] As a house guitarist, he played on many recordings such as "(Sittin' On) the Dock of the Bay," co-written with and performed by Otis Redding and Sam & Dave's "Soul Man" on which he was mentioned by name. When Cropper played on the song's remake by the Blues Brothers, lead singer John Belushi again mentioned Cropper. On the early Stax recordings, Cropper is known to have played a 1956 Fender Esquire and later used a blonde Fender Telecaster.

At this time, Cropper's fame was not limited to the United States. The Beatles favored Cropper's playing, and his production on Otis Redding records. John Lennon and Paul McCartney made tentative plans to record in Memphis and to work with the guitarist. However Brian Epstein canceled the sessions, citing security problems.[9] Regarding this period, Rob Bowman, in his book Soulsville U.S.A.: The Story of Stax Records, quoted Booker T. Jones as saying:

We were writing sounds too, especially Steve. He's very sound-conscious and he gets a lot of sounds out of a Telecaster without changing any settings — just by using his fingers, his picks and his amps.

Along with influential work with Booker T & The MG's, Cropper co-wrote "Knock on Wood" with Eddie Floyd, "In the Midnight Hour" with Wilson Pickett and "(Sittin' On) The Dock of the Bay" with Otis Redding. In 1969, Cropper released his first solo album, With a Little Help From My Friends. 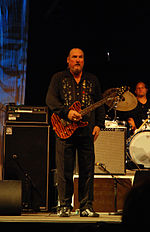 When Cropper left Stax in the fall of 1970,[10] the label lost one of its most successful producers and songwriters. Cropper then set up TMI Studios with Jerry Williams and former Mar-Key Ronnie Stoots. He worked with many musicians including Tower of Power, Rod Stewart, John Prine, José Feliciano, The Jeff Beck Group, Ringo Starr and John Lennon.

By 1975, Cropper had moved to Los Angeles and along with Jones, Jackson and Dunn, reformed Booker T. & the M.G.'s. Jackson, whom Cropper called "the greatest drummer to ever walk the Earth," was murdered in his Memphis home before the group could make their comeback. In 1978, Cropper and Dunn became members of Levon Helm's RCO All-Stars and then went on to figure prominently in the Blues Brothers Band with drummer Willie Hall. This led to two albums, appearances in the movies Blues Brothers and Blues Brothers 2000, and the movies' soundtracks. Cropper also re-recorded "(Sittin' On) The Dock of the Bay" (1979) for Sammy Hagar. Cropper lived in Los Angeles for the next thirteen years before moving to Nashville and reuniting with the Blues Brothers Band in 1988.

Cropper has a cameo in the "Weird Al" Yankovic mockumentary The Compleat Al (1985), where he plays a bit of "Soul Man" in an unsuccessful attempt to join Al's band.

In 1992, Booker T. & the M.G.'s were inducted into the Rock and Roll Hall of Fame and Cropper appeared with a new line-up of the group for the Bob Dylan 30th Anniversary concert, in October 1992 at Madison Square Garden, performing songs by and backing Dylan, Eric Clapton, George Harrison, Tom Petty, Johnny Cash, Chrissie Hynde, Sinéad O'Connor, Stevie Wonder and Neil Young. The concert was recorded and later released as The 30th Anniversary Concert Celebration (1993). Young later recruited this line up of Booker T. and the M.G's to tour with him and record as his studio band.

In 1996, Cropper was named "the greatest living guitar player" by Britain's Mojo magazine. When asked what he thought of Cropper, the guitarist Keith Richards said, "Perfect, man."[11] In February 1998, Cropper released The Interview - Play It, Steve! which included some of soul music's most enduring songs. The album title came from the "shout" of the title phrase by Moore on Sam & Dave's "Soul Man" and later by John Belushi (with the Blues Brothers).

In June 2004, Cropper appeared with Dunn and Jones as the backing band for Eric Clapton's Crossroads Guitar Festival, held at the Cotton Bowl in Dallas. Others who appeared included Joe Walsh and David Hidalgo.[12] On June 9, 2005, Cropper was inducted into the Songwriters Hall of Fame. 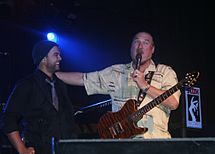 He co-produced The Memphis Album (2007), recorded by Australian soul singer Guy Sebastian. Cropper also played guitar on the subsequent promotional tour, which was recorded and released two years later as The Memphis Tour. On March 2, 2008, Cropper and Sebastian were guests on the Vega Sunday Session with host Mark Gable from the rock band the Choirboys.[13] On July 29, 2008, Cropper and Felix Cavaliere released the album Nudge It Up A Notch. In August 2008, Cropper appeared at the Rhythm Festival alongside the Animals.[14]

On November 12, 2009, EMP/SFM presented Cropper with their "Founders Award." On October 17, 2010, Cropper was inducted into the Nashville Songwriters Hall of Fame.[15]

On August 9, 2011, Cropper released the album Dedicated which was his tribute to the "5" Royales. In 2013 he was a special guest at selected concerts as part of Peter Frampton's Guitar Circus Tour, including the first performance which featured Frampton, Robert Cray and Vince Gill.[16]

In November 2021, Cropper's Fire It Up was nominated for a Grammy Award in the Best Contemporary Blues Album category.[5] 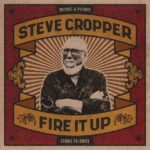