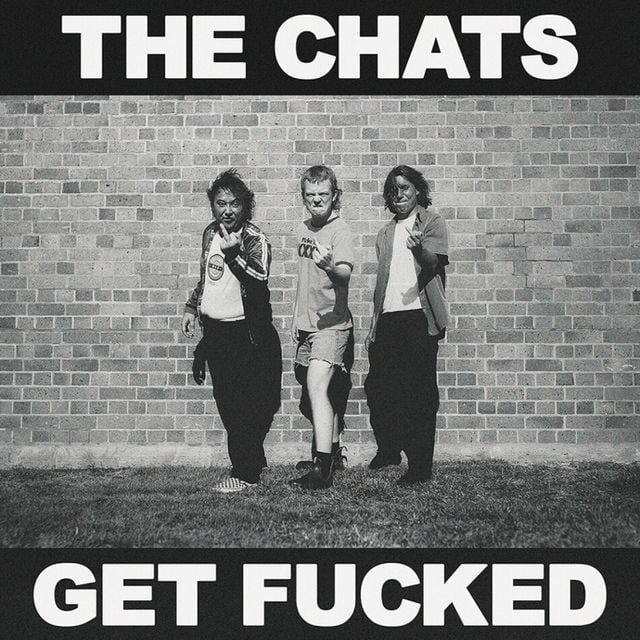 The Chats ¦ Get Fucked

The Chats are an Australian punk rock band that formed in 2016 in the Sunshine Coast, Queensland. They describe their sound as "shed rock". The current band lineup is composed of guitarist Josh Hardy, drummer Matt Boggis, and bassist and vocalist Eamon Sandwith. Known for their songs about Australian culture, they initially went viral for their song "Smoko" and its accompanying music video in 2017.[2][3][4][5] To date they have released two EPs, The Chats (2016) and Get This in Ya!! (2017), and two studio albums High Risk Behaviour (2020)[6] and Get Fucked (2022).

Josh Price, Matt Boggis and Eamon Sandwith met in music class at St. Teresa's Catholic College in Noosaville, Queensland. When they were 17, in September 2016, they formed the Chats, with Price on guitar, Boggis on drums, and Sandwith on bass and vocals. Former member Tremayne McCarthy also played bass and guitar in the original lineup.[7] The band takes its name from the phrase "that's chat" - (Australian slang to describe something gross/disgusting/bad).

Bassist Eamon Sandwith performing live with the Chats in 2017

Their second EP, Get This in Ya!! was released on 31 July 2017, "another thrilling seven-song slice of economic, stripped-down, early Buzzcocks-styles punk tension".[9][7] It was tracked/recorded at Eleven PM Studios in Nambour, Queensland, Australia, by Finn Wegener and Michael Currie on 24 June 2017. Former member, Tremayne McCarthy, actually played bass on the "Smoko" track and spoke the line "Is it Smoko?". Michael Currie was the producer and decided that the best way to record the band was all in the same room together live. Only very minimal overdubbing was done. It was then mixed and mastered by Michael Currie at his Polished Turd Studios in Brisbane, Australia. The music video for the track "Smoko", filmed with no budget at a building site, was directed by Matisse Langbein, who also did the cover art for the EP, and was released on the 3rd of October, quickly becoming a viral hit and drawing attention from popular rock musicians Dave Grohl, Josh Homme, Iggy Pop, Alex Turner.[10][11] Triple J argued that the song "was an instant classic of a youth anthem on a par with 'You Really Got Me', 'My Generation' or 'Teenage Kicks'".[7]

On 3 July 2018, the Chats released the single "Do What I Want", announced to be included in their forthcoming studio album.[12][13]

The band signed a global deal with Universal Music Publishing Australia on 19 March 2019, and founded their own label, Bargain Bin Records. Their distribution is handled by Cooking Vinyl Australia.[14][15][16] On 21 March, the Chats released "Pub Feed" alongside an accompanying music video.[17] Throughout July, the band toured the United States.[18] On 26 July, they released the single "Identity Theft" alongside an accompanying music video, which contains references to the video game Guitar Hero.[19] The band performed at the UK Reading and Leeds Festivals in August.[20] In October, the Chats commenced an Australian national tour.[21] The band performed a headlining tour in the UK during December 2019.[20] When asked about the then-untitled High Risk Behaviour during an interview at the Reading Festival, Sandwith revealed that the songs were already recorded: "We're gonna call it done...we're not perfectionists or anything.".[22]

In late-December, Sandwith posted a song criticizing Prime Minister Scott Morrison for his perceived apathy and carelessness towards the 2019-20 bushfire crisis to Instagram, titled "I Hope Scott's House Burns Down"; according to Pedestrian.tv, the song is being used to aid fundraising efforts for numerous volunteer firefighter groups.[23] The band released the single "The Clap" on 17 January 2020 and revealed the name of their debut studio album, High Risk Behaviour, as well as a release date of 27 March. On 6 March, weeks before its release, the band released the single "Dine & Dash" and its accompanying music video.[24]

2020–present: Price's departure and Get Fucked

On 8 November, the band released the single, "AC/DC CD", a tribute to the Australian band AC/DC. Guitarist Josh Price was not featured in the song’s music video, but Josh Hardy of Australian band the Unknowns was. In December, the band officially confirmed Price's departure and announced Hardy as his replacement.[25]

On 10 September 2021, the band released a cover of Metallica's "Holier Than Thou" for the charity tribute album The Metallica Blacklist.[26] This was followed in December by another cover version, The Wiggles' "Can You Point Your Fingers (And Do the Twist?)", as part of the Wiggles tribute album ReWiggled. The Wiggles simultaneously shared a cover of The Chats' "Pub Feed", which would appear on the album's second disc.[27]

In March 2022, the band shared the single "Struck by Lightning".[28] In May, the band announced their second studio album Get Fucked, released on 19 August 2022. The announcement came with the release of the album's second single, "6L GTR".[29] 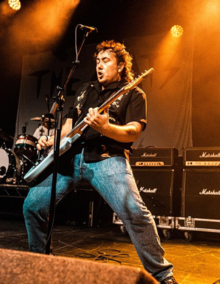 The band coined the term "shed rock" to describe their sound, and their self-contained approach has been likened to that of King Gizzard & the Lizard Wizard.[7] They cited Australian bands Cosmic Psychos, Dune Rats and Eddy Current Suppression Ring as major influences.[2]

The Rolling Stone Australia Awards are awarded annually in January or February by the Australian edition of Rolling Stone magazine for outstanding contributions to popular culture in the previous year.[40]