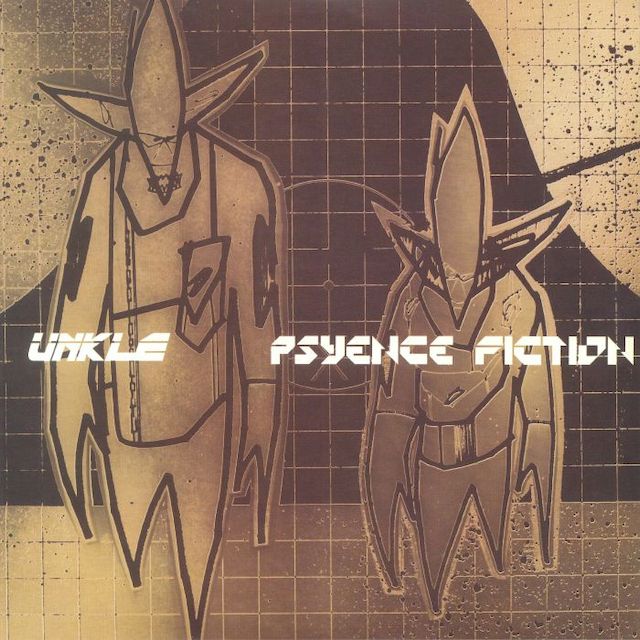 Psyence Fiction is the debut studio album by British-American electronic music group Unkle, released on 24 August 1998 by Mo' Wax. The creation of the album was helmed by the duo of James Lavelle and DJ Shadow, with the former overseeing the album's themes and the latter handling musical composition. Psyence Fiction also features contributions from a varied cast of guest musicians recruited by Lavelle.

Psyence Fiction reached number 4 on the UK Albums Chart and number 107 on the US Billboard 200.

"Unreal" is an instrumental version of the song "Be There" (featuring Ian Brown), which was released a year later as a single. On some early pressings of the album, instrumental versions of "Guns Blazing" and "The Knock" were added as tracks 13 and 14. On some re-releases of the album, "Be There" was added as track 13. Some versions (mainly the Japanese release, but also the US promotional copy) contain the hidden track "Intro (optional)" as "track zero", which is actually the pre-gap (index 0) of track 1. This can be accessed by "rewinding" the first track on some CD players.

Psyence Fiction was widely anticipated due to its high-profile cast of collaborators,[11] with Shadow's involvement in particular leading to expectations that the album "would be a sort of Endtroducing..... Part II".[12] It was ultimately released to mixed reviews,[11] with many critics finding that the album failed to live up to pre-release hype.[8][11] John Mulvey of NME wrote that Shadow's music "rarely gels with Lavelle's chosen singers or even comes to terms with the song (as opposed to groove) format of much of the material".[4] Guardian writer Caroline Sullivan said that the album successfully sustains its "foreboding" mood, but added that "its strength is also its weakness: somewhere amid the sprawl of bad dreams it turns into nothing more than meandering tunes with spooky keyboards attached".[3] The A.V. Club's Joshua Klein criticised Unkle's decision to eschew hip hop in favour of a "more conventional alt-rock outline", concluding that "Psyence Fiction can be chalked up as an ambitious failure; its principals can put it on their résumés, but cultural historians needn't put in their books."[13] Critic Robert Christgau gave the album a one-star honorable mention, deeming it "Not beautiful (or weird) enough for its own beats".[14]

Among positive reviews, Barry Walters of Spin wrote that DJ Shadow "frames suitably eloquent voices with chaotic but never overwhelming aural bricolage", calling Psyence Fiction "the illest soundclash since the last time a B-boy crashed a George Romero film festival and refused to turn off his boom-box".[10] Writing in Rolling Stone, Lorraine Ali found the album to be "neither a lofty concept album nor the sonic equivalent of cinema", but concluded that "it is Shadow and Lavelle's striving for such greatness that makes UNKLE a compelling work in progress".[7] Entertainment Weekly's David Browne wrote that despite the presence of filler, "the best bits... are like a soundtrack for a surreal, melancholy art film that exists in Shadow's and Lavelle's heads."[2] Gareth Grundy of Select wrote that Shadow's production provides the album with coherence, and that when he and Lavelle "click... it hums with joie de vivre – the sound of a vision thrillingly realised".[9]

Disillusioned with the project, DJ Shadow departed Unkle following Psyence Fiction's release and distanced himself from the album.[15][16] Years later, James Lavelle opined that the album's hype ended up overshadowing its musical content, adding that he felt it was released at a time "when people wanted [him] to fail".[11] Shadow would later soften his stance on Psyence Fiction, remarking in a 2010 interview that he viewed the album fondly despite it being "somehow flawed".[17]

In the years following the release of Psyence Fiction, the album's reputation has steadily improved.[11][12] In a review for AllMusic, Stephen Thomas Erlewine found that Psyence Fiction, despite its musical flaws, "gains momentum on repeated listens" due to "Shadow's imagination and unpredictable highlights", which make for "a superstar project that doesn't play it safe and actually has its share of rich, rewarding music."[1] Writing in The Vinyl Factory, Elliot Wilder expressed similar sentiments and noted that the album had "gained cult status for its chaotic collages and maverick collaborations", adding that it "feels today like the kind of crazy, alt-star-strewn mash fest that it is".[12] Chris DeVille of Stereogum wrote that Psyence Fiction presaged "likeminded ecumenical collectives like Gorillaz and Handsome Boy Modeling School", and that "In terms of quality alone, it's worthy of remembering as one of the best albums of its era."[18] In 2015, Fact named it the 45th best trip hop album of all time.[19]

All other mixing and recording took place in London, England.

Unkle (often stylised as U.N.K.L.E. or UNKLE, occasionally known as UNKLE Sounds) are a British musical outfit founded in 1992 by James Lavelle. Originally categorised as trip hop, the group once included producer DJ Shadow and have employed a variety of guest artists and producers.

The first release credited to the 'Men from U.N.K.L.E' was a remix for United Future Organization, included on their 1992 Loud Minority single.[1] Lavelle and Goldsworthy were joined by Masayuki Kudo and Toshio Nakanishi of the Japanese hip hop crew Major Force (later Major Force West).

Shadow left the group after touring Psyence Fiction and was replaced by turntablist group the Scratch Perverts, who deconstructed the album and performed it live on turntables in 1999. Also in 1999, former producer Rich File remixed the track "Unreal", adding vocals by Ian Brown, and the resulting track was released as the single "Be There".

On 1 February 1999, Lavelle and the Scratch Perverts appeared on the Radio 1 program The Breezeblock, utilising "5 turntables". The set was largely based on tracks from Psyence Fiction, with some of them reworked live by Lavelle for the live performance. The Scratch Perverts' contribution consisted of scratching over the top of the Unkle tracks, a deconstructed version of "Be There", and some solo interludes.[2]

In 2001, Lavelle and File resurfaced as Unklesounds, with a DJ mix created for Japanese radio entitled Do Androids Dream of Electric Beats? This highlighted a new, more electronic direction the group had taken, and featured a number of tracks from Psyence Fiction, remixed in a techy breakbeat style.

Lavelle and File continued releasing mixes as Unklesounds. The mix album Edit Music for a Film: Original Motion Picture Soundtrack Reconstruction, featuring movie samples and tracks from film soundtracks, was created for the After Dark 2004 event at the ICA London. A single CD version was handed out at the event, and it was released officially as an extended two disc set in 2005. The group recorded music for a short film titled The Seed directed by Joe Hahn alongside John Debney and Mike Shinoda of Linkin Park.[3]

In September 2006, Global Underground released Self Defence: Never, Never, Land Reconstructed and Bonus Beats, a 4-CD box set of remixes and bonus tracks from the Never, Never, Land sessions, including tracks previously only available on the original DVD release of the album. It also contained remixes of a track mooted for their next album, featuring Ian Astbury of The Cult, titled "Burn My Shadow".

War Stories, the third album from Unkle, was released in summer 2007. The album again featured a number of guests including Josh Homme, Gavin Clark, Robert Del Naja, Ian Astbury, The Duke Spirit, Autolux and Neil Davidge. Following the release of the single "Hold My Hand", Pablo Clements (of The Psychonauts) became an Unkle member.

Unkle's fourth full album titled End Titles... Stories for Film was released in July 2008.[6] It includes collaborations with Chris Goss, Black Mountain, Philip Sheppard, Dave Bateman, Joel Cadbury, and James Griffith (Lake Trout). The album is described in the sleeve notes by Lavelle as "not a new album in the usual sense, but new music that has been inspired by the moving image." As such, it can be considered a companion piece both to War Stories but also to the earlier Unklesounds mix, Edit Music for a Film.

14 December 2008 saw the digital release of End Titles... Redux, an album that was released the following day in a limited pressing of 3000 CDs available from official Unkle stores. This release features seven re-interpreted tracks from the album End Titles... Stories for Film plus 2 never-before-released tracks, "When Once It Was" and "A Perfect Storm". The exclusive package is a 6-panel soft-pack with a 12-page booklet with images by Robert Del Naja.

Upon the release of the single "Heavy Drug (Surrender Sounds Mix)" in August 2009, Unkle disclosed they had already begun recording their next studio album, Where Did the Night Fall, which was released in May 2010. This also included an all-star cast of performers including: Mark Lanegan, Nick Cave, The Black Angels, Sleepy Sun, and Katrina Ford, as well as ELLE J and Gavin Clark. The album is also available as a digital download from Unkle's site.

It was announced on 18 April 2011 that Unkle would headline the Dance Stage at the Reading and Leeds Festivals.[7] They would be performing a world-exclusive audio-visual DJ set at the festivals, playing songs from their back catalogue alongside remixes of other artists' songs as well as Unkle's own material. They would be performing under the name UNKLE Sounds.[8]

On 27 February 2014, the "God of Light (Original Game Soundtrack)" single was published on iTunes, with two songs from the God of Light game by Playmous and EON.[9] The in-game credits list "Music composed by: UNKLE / James Lavelle / Charlie May."

On 15 July 2016 UNKLE released the single "Cowboys or Indians", which featured artists Ysée, Mink, and Elliott Power. Pitchfork Media reported UNKLE would release an album that same year. In January 2017 UNKLE announced the pending release of the album The Road, which will be preceded by the single "Sick Lullaby" to be released in mid February 2017.[10] It coincides with an exhibition at the Lazarides gallery in London.[11]

Since 2016, UNKLE had returned to touring as a live collective after 4 years of performing DJ sets - with the exception of Matthew Puffett 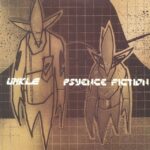