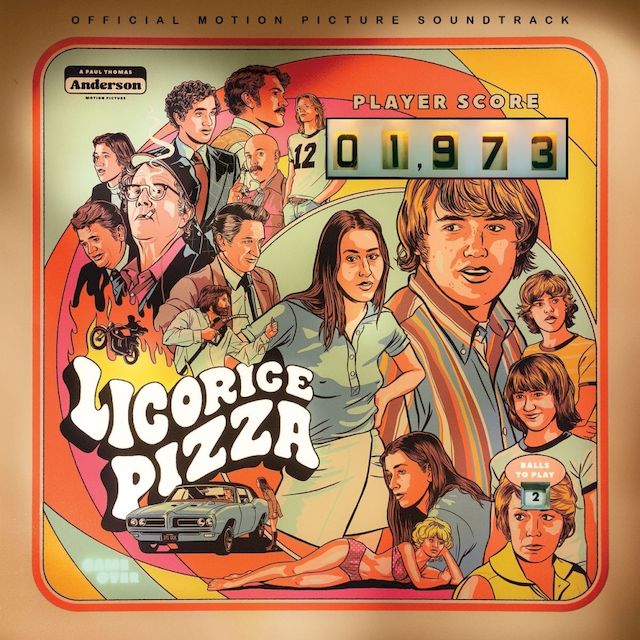 Licorice Pizza was released in the United States in select theaters on November 26, 2021, and was widely released on December 25, 2021.[6] The film received acclaim from critics and received three awards from the National Board of Review, including Best Film. It was also named one of the best films of 2021 by the American Film Institute and received four nominations at the 79th Golden Globe Awards, including Best Motion Picture – Musical or Comedy, along with eight nominations at the 27th Critics' Choice Awards, including Best Picture.

In the San Fernando Valley in 1973, 15-year-old Gary Valentine prepares for his high school picture day. He notices 25-year-old Alana Kane, a photographer's assistant, and strikes up conversation with her. She rebuffs his advances, but ultimately later meets with him for dinner and the two begin a friendship. Gary attends auditions and appears in a variety show with Lucy Doolittle, and when Gary's mother Anita reveals that she'll be in Las Vegas when she was supposed to take him to New York, Alana chaperones him instead. On the plane to New York, Alana meets Lance, one of Gary's co-stars in a Doolittle film, and the two begin dating, but they break up after an awkward dinner with Alana's family.

Gary starts a waterbed company with Alana as an employee and assistant. While selling beds at an expo, he is arrested on suspicion of murder but is soon released. When Alana decides she wants to try her hand at acting, Gary introduces her to his agent, who gets her an audition for a film starring Jack Holden and directed by Sam Harpoon. After her audition, Alana accompanies Holden to a local restaurant, which Gary and his friends, as well as film director Rex Blau, are also patronizing. Blau convinces Holden, an avid motorcycle enthusiast, to recreate a stunt on a local golf course involving a jump over a fiery ramp. An inebriated Holden brings Alana along but she topples off the bike in the process, and Gary runs to her to make sure that she is unhurt while Holden performs the stunt and subsequently wrecks the motorcycle, though he is unharmed.

Gary, Alana, and Gary's friends deliver a waterbed to Jon Peters' house as a gas crisis begins to sweep the country. An irritated Peters leaves to go see a film, but not before threatening to murder Gary's family, specifically his brother, if the group ruins his house. After setting up the bed, an upset Gary floods the house before leaving with Alana. They are later waved down by an agitated Peters, whose car had run out of gas. They drive him to a gas station but upon arrival, he threatens a customer. Alana and Gary leave him behind, with the latter stopping to attack Peters' car, but they soon run out of gas as well. Alana successfully maneuvers the truck backwards down a hill until Gary and his friends are able to fill the tanks. However, the waterbed business ultimately fails as a result of the gas crisis.

Alana begins to work on the Joel Wachs mayoral campaign. Gary briefly joins her, but after overhearing that pinball has been legalized, he decides to open an arcade. The two cut ties after an argument during which Alana implies that Gary is immature and he calls her old in retaliation. As Gary prepares for the opening of his arcade, Alana is invited for drinks with Wachs that night. She arrives at the restaurant and learns Wachs is gay after being introduced to his partner, Matthew. He asks her to take Matthew home as a beard, despite Matthew's visibly hurt feelings. Afterwards, Alana apologizes to Matthew and the two share kind words with each other after she takes him home. Alana later goes to Gary's arcade to see him, but finds him gone, as he had left to find her at Wachs' office. Eventually, the two reunite and head for the arcade, where the two share a kiss and run out of the arcade into the night, at which point Alana tells Gary she loves him.

Around 2001, Anderson was walking by a middle school in Los Angeles on picture day. He observed one of the students nagging the female photographer and had an idea of the student having an adult relationship with the photographer. The screenplay of Licorice Pizza evolved from this experience and additional stories told to Anderson by his friend Gary Goetzman, who was a child actor who had starred in the film Yours, Mine and Ours with Lucille Ball, appeared on The Ed Sullivan Show, and eventually started a waterbed company and pinball arcade. Goetzman at one time delivered a waterbed to Jon Peters's home.[12][13] Anderson considered Fast Times at Ridgemont High and American Graffiti as major influences in the making of Licorice Pizza.[7]

Anderson received permission from Jon Peters to develop a character based on him, on the sole condition that Peters's favorite pick-up line is used. Anderson went on to create a "monster version" of Peters based on 1970s Hollywood producers who had "a reputation for a lot of bravado and aggro energy".[7]

The working title of the film was reported in November 2020 as Soggy Bottom.[14] In September 2021, the film was officially titled Licorice Pizza,[15] named after a former chain of record shops in southern California.[16] Anderson explained, "If there's two words that make me kind of have a Pavlovian response and memory of being a child and running around, it's 'licorice' and 'pizza' [...] It instantly takes me back to that time." He added that the words "seemed like a catch-all for the feeling of the film [...] that go well together and maybe capture a mood."[7][13]

Anderson wrote the screenplay with Alana Haim in mind and offered her the lead role in summer 2019.[17] He has a close connection to her band Haim, having directed several of their music videos, and is a close friend of the Haim family.[18] Haim's sisters Este and Danielle and parents Mordechai and Donna were also cast to play the roles of her family.[19] Cooper Hoffman, the son of Philip Seymour Hoffman, was cast late in the process after Anderson found the auditioning young actors too "precocious" and "trained" to match the naturalistic style of Haim's acting.[18] Licorice Pizza marks the feature film debut of both Haim and Hoffman.[19][20] Described as a "family-and-friends project" by the Los Angeles Times, the film also features Anderson's longtime partner Maya Rudolph, their four children, and many of their neighborhood friends in various roles.[13]

Principal photography began in Encino, California in August 2020.[21] In November 2020, it was reported that principal photography had wrapped and post-production had begun.[22] A Tudor manor previously owned by actor Lyle Waggoner was used for scenes at Jon Peters's house.[23] Tail o' the Cock, a famed local restaurant that was demolished in 1987, was recreated for the film at the Van Nuys Golf Course.[13][24] Haim spent a week learning to drive trucks, and performed her own stunt in which she backed a truck down a long hill.[17]

Radiohead's Jonny Greenwood composed the film's score cues. The first trailer for the film, which was released online on September 27, 2021, was set to David Bowie's "Life on Mars?".[26]

The official soundtrack will be released by Republic Records. Included are some of the songs featured in the film, as well as one of the original tracks composed by Greenwood.[27]

On December 18, 2019, Focus Features came on to produce and distribute the film.[28] On July 17, 2020, it was reported that Metro-Goldwyn-Mayer acquired distribution rights to the film from Focus, and that MGM would set a new start date due to the COVID-19 pandemic.[29]

On the review aggregator website Rotten Tomatoes, 91% of 249 reviews are positive, with an average rating of 8.4/10. The website's critical consensus reads, "Licorice Pizza finds Paul Thomas Anderson shifting into a surprisingly comfortable gear – and getting potentially star-making performances out of his fresh-faced leads."[37] Metacritic, which uses a weighted average, assigned the film a score of 90 out of 100 based on 55 critics, indicating "universal acclaim".[38] Audiences polled by PostTrak gave the film an 87% positive score, with 73% saying they would definitely recommend it.[39] 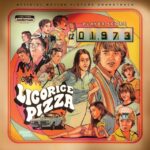