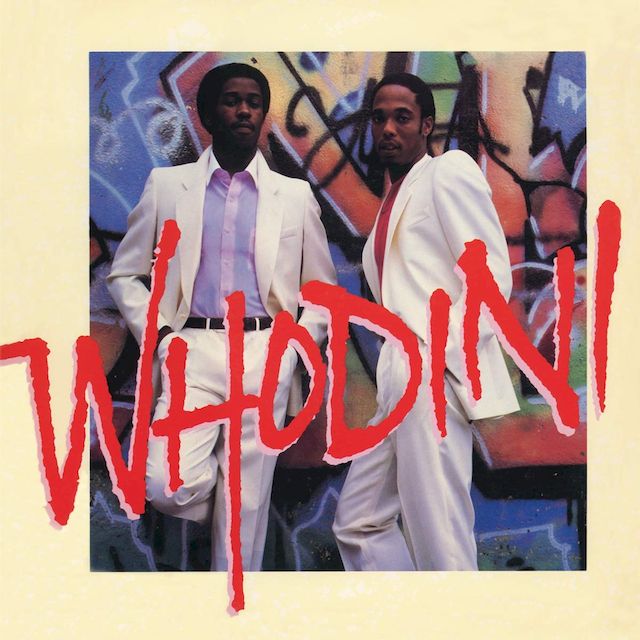 From a contemporary review, Ken Tucker of The Philadelphia Inquirer gave the album four stars out of five, stating that "Unlike so many dance-club hit makers, Whodini can sustain its cleverness over the length of an entire album."[6]

Not to be confused with Houdini (rapper) or Harry Houdini.

Whodini is an American hip hop group that was formed in 1982.[1] The Brooklyn, New York-based trio consisted of vocalist and main lyricist Jalil Hutchins; co-vocalist John Fletcher, a.k.a. Ecstasy (who wore a Zorro-style hat as his trademark); and turntable artist DJ Drew Carter, a.k.a. Grandmaster Dee.[2]

Coming out of the fertile New York rap scene of the early 1980s, Whodini was one of the first rap groups to add a R&B twist to their music, thus laying the foundation for a new genre - new jack swing. The group made its name with good-humored songs such as "Magic's Wand" (the first rap song accompanied by a video), "The Haunted House of Rock", "Friends", "Five Minutes of Funk" and "Freaks Come Out at Night". Live performances of the group were the first rap concerts with the participation of breakdance dancers from the group UTFO. Russell Simmons was the manager of the group in the 1980s.[3]

The group has released six studio albums. 14 singles of the group hit the charts of the American magazine Billboard. Four albums of the group were certified Platinum by RIAA.

Whodini was among the first hip hop groups to cultivate a high-profile national following for hip hop music and made significant inroads on urban radio.[4] They were contemporaries of other hip hop groups such as Grandmaster Flash & the Furious Five, Afrika Bambaataa, Run-D.M.C., The Fat Boys and Warp 9. The group signed with London-based independent record label Jive Records in 1982;[4] they enjoyed a string of hits for several years, mostly charting on urban and R&B radio stations. The bulk of production on their releases was done by Larry Smith, a bass player who also handled much of Run-D.M.C.'s early work.

In 1982, Whodini made a rap story with their debut single "Magic's Wand", an ode to rap radio pioneer Mr. Magic,[4] which became the first rap song to receive a music video.[5] Synthpop and electro pioneer Thomas Dolby helped produce this single.[4] "Magic's Wand" also has the distinction of being one of Whodini's most-sampled songs.

On July 8, 1983, the group released the self-titled album Whodini on vinyl and audio cassettes.[4] The album was produced by influential German pioneer Conny Plank at his own studio near Cologne, Germany. On CD, the album was released in the United States only in 2010. The second single, "Haunted House of Rock", was released in time for Halloween, 1983.[4] Whodini combined the goofy fun of The Fat Boys with the virtuosity of Run-D.M.C. to create what is the rap equivalent of horror movies. Heavy on the sound effects, the song is full of references to various famous monsters and boogymen - Dracula, Bloody Mary and the Invisible Man all show up.[6][7]

In 1984, the group released the second album Escape.[4] The entire album was fully produced by Larry Smith. From the laid back groove titled "Five Minutes of Funk" to "Friends", a cynical story of betrayal sampled everywhere from Nas' "If I Ruled the World (Imagine That)" to 2Pac's "Troublesome '96", to harder edged singles "Freaks Come Out at Nite" and "Big Mouth".[5]

Many of these songs were also groundbreaking in hip hop culture, as each one of the songs told a unique story from the urban perspective. The album ended up being certified for platinum-level sales by the RIAA, selling over one million albums upon its release.[citation needed]

The instrumental version of "Five Minutes of Funk" was used as the theme music for WNYC TV show, Video Music Box,[8] an influential early hip hop music video show. The album is out of print. On May 17, 2011, a deluxe version of Escape was released on CD with nine bonus tracks.

In 1986, the group released a third album Back in Black,[4] fully produced by Smith. A number of songs from the album received heavy local New York airplay, such as "Funky Beat" and the controversial "I'm a Ho". "Fugitive" was guitar-driven funk and "Last Night (I Had a Long Talk With...)" was introspective. Paul Kodish, drummer of Pendulum, was featured on the album.

From 1982 to 1986, the group was at its most productive; they toured with the more successful bands such as Run-D.M.C., LL Cool J, The Fat Boys, and other prominent hip hop, R&B and funk bands.[4] The group was involved in the first Fresh Fest tour, which was the first hip hop tour to play large coliseums nationwide.[4] In July 1986, they appeared at Philadelphia's Spectrum Stadium in front of an audience of 18,000.[9] They were the first rap act and break dance troop to tour in the UK and Europe, with UTFO also appearing with them as their break dance act.[4]

Open Sesame and the New School

By 1987, the group had earned its share of gold singles and albums. With the fourth album Open Sesame, its final release of the 1980s,[4] the group had turned away from their once-playful simple beats and catchy rhymes of the old school, and instead became vocally harder and more instrument-driven, with guitars and horns and bells. They even began to sample, as a snippet of Cheryl Lynn's "Got to be Real" is heard on the song "Now That Whodini's Inside the Joint". Smith again produced the entire album except for two tracks, "Be Yourself" and "I'm Def (Jump Back And Kiss Myself)", produced by Sinester.

This new school style had been similarly done almost a year previously, on the multi-million selling debut albums by L.L. Cool J and the Beastie Boys, as many groups had already turned to the kind of rap and rock music that crossed over easily, and Open Sesame failed to produce any real hits.

Although the group was still obligated to Jive Records, for the next few years the band eked out its tenure by occasionally only releasing singles, including "Anyway I Gotta Swing It" for the A Nightmare on Elm Street 5: The Dream Child movie soundtrack.

In the 1990s, the band made an attempt at a comeback, and in that same year the group signed with MCA Records and released the fifth album Bag-A-Trix in 1991, which failed to have commercial impact, as it tried again to reinvent using the then-current sound of new jack swing.[4] Smith produced six of the tracks on the album, two of which co-authored with the band Major Jam Productions, which separately produced the other four tracks, and Fresh Gordon made music for the other four songs.

In mid-1994, the group scored a hit single with "It All Comes Down to the Money",[4] which was co-produced by Public Enemy DJ Terminator X on his album Super Bad.

Talks with Def Jam Recordings for a new deal stalled, and in 1996, the group was signed by Jermaine Dupri to his then Columbia Records-distributed So So Def Recordings imprint. As a child in the 1980s, Dupri did a brief stint as a dancer for the group.[10]

Their sixth album Six produced one single, "Keep Running Back", and appeared briefly on the R&B chart. The album was fully produced by Dupri, except for three tracks, which were created by Dave Atkinson and Andy "Red Spyda" Thelusma.

Since the Six album, the group has not released any new music, but its older songs have been featured in many various old school compilations and three greatest-hits collections have been released: The Jive Collection, Vol. 1 in 1995, Rap Attack in 2003, and Funky Beat: The Best of Whodini in 2006, which featured the seven-minute "Whodini Mega Mix", which was a medley of some of the biggest hits.

In October 2007, Whodini was an honoree at the 4th Vh1 Hip Hop Honors.

In March 2012, Whodini was featured in Season 5 Episode 3 of the TV One hour-long music documentary series, Unsung.

In August 2012, Whodini was presented with the Icon Award by the Underground Music Awards.

In October 2012, Whodini was inducted into the 4th annual Long Island Music Hall of Fame.

On August 16, 2018, the group was awarded the Hip-Hop Icon Award at the third Black Music Honors ceremony held at the Tennessee Performing Arts Center in Nashville, Tennessee.[12] 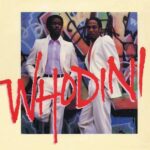