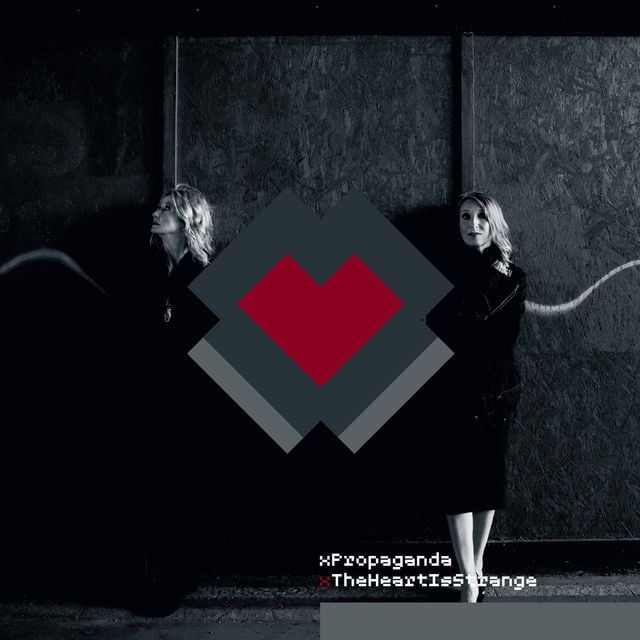 xPropaganda ¦ The Heart Is Strange

Veröffentlichung The Heart Is Strange:

Hörbeispiel(e) The Heart Is Strange:

The Heart Is Strange

Propaganda are a German synth-pop band formed in Düsseldorf in 1982. They signed a recording contract with ZTT Records as early as 1983 and released their first single "Dr Mabuse" in 1984. Followed by their debut studio album, the critically acclaimed A Secret Wish, in 1985. Two of the album's singles, "Dr. Mabuse" and "Duel", were UK Top 30 hits. A second studio album, 1234 (1990), was recorded with a markedly different line-up and released by Virgin Records to less success.[1] There have been several partial reformations of the group in the 21st century, with the original vocalists currently active as xPropaganda.

Propaganda was formed in Düsseldorf, West Germany, in 1982, by Ralf Dörper (a member of the pioneering German industrial band Die Krupps). As a trio, with artist Andreas Thein and vocalist Susanne Freytag, the group made initial recordings in Germany which were destined for future release in the UK, where Ralf Dörper's early experimental recordings had received critical acclaim by radio DJ John Peel and journalist Chris Bohn (aka Biba Kopf). With the inclusion of classically trained musician and composer, Michael Mertens and singer Claudia Brücken (who had been in an all female band, The Topolinos, with Freytag), music journalist Paul Morley signed the band to Trevor Horn's newly formed ZTT Records label in 1983.[2]

The group relocated to the United Kingdom and released the single "Dr. Mabuse", named after the fictional character made famous by filmmaker Fritz Lang. The single reached the Top 30 in the UK Singles Chart,[2] and the Top 10 in Germany. The group appeared on various TV shows in the UK, including Channel 4's The Tube. Here, as well as performing "Dr. Mabuse", the group also gave one of its few performances of a cover version of Throbbing Gristle's song "Discipline".[3]

Before the year was out, Thein was asked to leave the band due to musical differences. With Mertens now filling the gap left by his departure, the band forged ahead with recording its follow-up single and debut album. However both of these were to be delayed as a result of the unexpectedly huge success of ZTT's most famous signing, Frankie Goes to Hollywood.[2] As the label was still in its infancy, ZTT was forced to spend all its limited resources on promoting and marketing Frankie Goes to Hollywood, and this also meant that Trevor Horn was not available to produce Propaganda's album.[2] Stephen Lipson, one of Horn's established studio engineers, took his place along with Andy Richards playing keyboards, but the delay meant that Propaganda's second single, the more pop-oriented "Duel", did not surface until April 1985.[2] Perhaps the band's most recognisable release, it was also their highest-charting single in the UK, reaching number 21. The band made its single appearance on the flagship BBC music programme Top of the Pops in June of that year.

In May 1985, with Frankie Goes to Hollywood becoming tax exiles in Ireland, the band effectively headlined "The Value of Entertainment", a series of showcase gigs of ZTT signings, held at the Ambassadors Theatre in London. The shows also featured Art of Noise, Anne Pigalle, Andrew Poppy and Instinct. Propaganda were joined on stage by former Simple Minds bassist Derek Forbes and ex-Japan drummer Steve Jansen.[4]

The first week of July 1985 finally saw the release of the band's debut album, A Secret Wish.[2] which was written by Mertens and Dörper. After receiving considerable critical acclaim and some commercial success, it reached number 16 on the UK Albums Chart. The album was followed by another single, "p:Machinery", in August 1985,[2] which only reached number 50 in the UK, but becoming a bigger hit in Italy, France, the Netherlands, Germany and Switzerland and even being used in the hit US TV Show Miami Vice (1986 episode: The Fix).[5] The 12-inch version of this release caused controversy (even within the group) as Paul Morley thought it was a good idea to have the sleeve feature a quote by writer J. G. Ballard, praising the activities of the German extremist group Red Army Faction. Ariola, who distributed ZTT's releases in Germany, refused to carry the 12" as a result, so the quote was changed on the German release to another by Ballard, on the aesthetic perfection of German suburbs.[citation needed]

The group spent the rest of the year on their "Outside World" tour, taking in Europe and America. They were joined once again by Derek Forbes on bass, with his fellow ex-Simple Minds colleagues Brian McGee on drums, and Kevin Armstrong on guitar, with backing tapes used for most of the keyboard parts.[citation needed] In the meantime a remix album, Wishful Thinking, was released in November 1985. Originally intended for the American club market, the album was also released in Europe, but against the wishes of the group themselves.[citation needed] The album peaked at number 82 in the UK. A remixed version of "p:Machinery" was also re-released as a single, only four months after its original release. In the UK, it too failed to make an impact and peaked at number 83, but was, again, more successful in France and Germany.[citation needed]

The year 1986 started positively - the single P-Machinery gained the no 1 chart position in Spain (for one week) - but ended in disaster. In late 1985, its management had introduced the band to the London-based music lawyer Brian Carr of Compton Carr, who had helped to win the case between John Lydon (Sex Pistols/Public Image Ltd.) and his management. Carr explained to the group members that under their current contracts with ZTT, they could go on making records for the rest of their lives and never make any money from them. Based on this information the band asked ZTT to renegotiate the contracts, which the company declined. Soon afterwards Claudia Brücken left Propaganda to pursue a solo career, remaining signed to ZTT.[2] After a protracted legal battle, which saw the remaining members of Propaganda under an injunction by ZTT for fourteen months, they were finally released from their contract to ZTT in a hurried out-of-court settlement in the summer of 1987.[2] ZTT signed the duo Act of Brücken and Thomas Leer in 1988,[2] which did not match the commercial success of Propaganda despite the production of Stephen Lipson.

In 1988, the band (initially still including Ralf Dörper and Susanne Freytag) signed to Virgin Records, and began recording new material. Alongside Michael Mertens was the new line-up of American vocalist Betsi Miller, with bassist Derek Forbes and drummer Brian McGee (both ex-Simple Minds) who had both actually joined the band following their split with ZTT in 1986.[2] The result was a new album, released in 1990 called 1234,[2] produced by former Tears For Fears' associates Ian Stanley and Chris Hughes, Miller's future husband. Dörper's lyrics were used on the singles "Only One Word", "Wound in My Heart", and "Vicious Circle", the album track Freytag guested on. David Gilmour of Pink Floyd played guitar on second single, "Only One Word".[citation needed]

The first single from the album, "Heaven Give Me Words", was co-written with 1980s synthpop star Howard Jones[6] and reached the UK Top 40. Although the album was not as successful as A Secret Wish, only peaking at number 46 in the UK, it gave Propaganda their only real number 1 hit, with "Wound in My Heart" reaching number 1 in Argentina in 1990, and becoming a big success across South America.[citation needed]

In 1998, Mertens, Brücken, and Freytag reunited, signed an options deal with East West Records, and began working on new material. Several tracks were completed, including one produced by Tim Simenon and featuring Depeche Mode's Martin Gore on guitar. A video for one song, "No Return", was produced in Morocco and directed by "Keyser Soze" in December 1998. Two minute clips of it, along with photos of the shoot, were released via the band's official website in early 2000. However, no album materialized and, in January 2002, Brücken announced, "The reunion was worth a try, but did not work out."[citation needed]. Tracks of these recording sessions were leaked to the internet in 2002.

However a real reunion of the four original band members took place in November 2004, when Brücken, Dörper, Freytag and Mertens - but without Thein - performed the title "Dr Mabuse" at a "Concert for The Prince`s Trust" which took place at Wembley Arena. It celebrated 25 years of successful activity of the producer and co-owner of ZTT Records: Trevor Horn.

A few years later the band also appeared exclusively on a German TV show celebrating the best songs of the 1980s.

In early 2005, Propaganda, now comprising Susanne Freytag and Michael Mertens, started to release new material on the German independent label Amontillado Music.[7] The 12" vinyl release "Valley of the Machine Gods" was sold out within two weeks.

In July 2010, a two-disc Deluxe Edition of A Secret Wish, containing the varying tracks released on both the original vinyl album, cassette and CD versions, was released to mark the album's 25th anniversary. This edition also included unreleased 12-inch remixes and previously unheard demos. The booklet accompanying the release noted that "At the time of writing, spring 2010, Mertens, Brücken, Freytag and Dörper are back on terms and for the second time since 2000 they are considering working together."

On 2 March 2011, Claudia Brücken performed at Scala in London and was joined by Ralf Dörper and Susanne Freytag for some of the tracks. Thomas Leer was also expected to perform but was unable to do so because of a throat operation. The gig was recorded for later DVD release and also featured Glenn Gregory and Martyn Ware of Heaven 17 and Andy Bell of Erasure.[8] However, in an interview around the same time, Brücken said that Mertens was unwilling to work with her any longer.[9]

Propaganda is credited for remixing Holly Johnson's single "Dancing with no Fear" (released 2015), on which Michael Mertens and Ralf Dörper also played a synthesizer.

The duo of Brücken and Freytag appeared on some retro festivals across Europe and did some shows performing "A Secret Wish" in Germany using the name "Duel", whereas in the UK the name "xPropaganda" was used. Here they supported Heaven 17 in late November and early December 2018 to mark the 35th anniversary of The Luxury Gap album. The duo of Brücken and Freytag were backed by the former OneTwo band.[citation needed] A Secret Place by xPropaganda was a 2018 album release of a London show.[11]

On 20 May 2022, the xPropaganda album titled The Heart Is Strange by Brücken, Freytag and Lipson was released in various formats by Universal Music on the ZTT imprint.[12][13][14] Music journalist Daryl Easlea of Louder praised the album as "a compelling listen", remarking as well that its style sounded "exactly like it could have followed their old group’s debut".[15] The album was a result of Claudia and Susanne approaching Stephen Lipson to ask him to write new songs with them that they could include in their live show. These were written and recorded during the lockdown and resulted in enough tracks to make an album. Their manager approached Universal with the album and gained a two-album deal. Michael Mertens had been approached to be involved in the song writing but declined.[16]

A version of Dr. Mabuse is used in the 1987 John Hughes film Some Kind of Wonderful.[2] 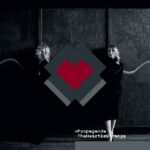